A molecular switch for fluorescence 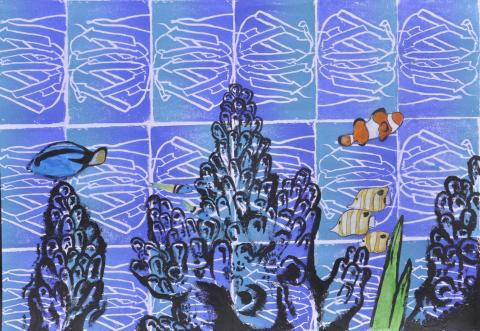 Like the coral in our warming seas, some colourful proteins can be bleached in harsh environmental conditions - but thankfully, this colour can return if we get the conditions right.

A loss of colour

The significance of the impact of climate change has become increasingly urgent in recent years with global temperatures consistently rising, leading to devastating knock-on impacts across the world. One of the key indicators of rising sea temperatures is coral bleaching, where coral species that are usually so colourful, appear drained of this colour. This process is linked to the delicate symbiotic relationship these corals have with colourful algae. The coral provides nutrients to the algae which, in turn, provide carbon fixation through photosynthesis.

In times of physiological stress, primarily temperature and radiation, this delicate symbiotic relationship can break down, leading to algae loss. This results in the appearance of ‘bleaching’ of the coral as this colourful coating is stripped away and this mutually beneficial arrangement breaks down. This process can be triggered by rises in sea temperature of only 1-2 degrees celsius, therefore this can be a clear and early marker of the impact of climate change upon our oceans.

In cases where the physiological stress experienced is dramatic or prolonged, it can cause the death of the coral. However, if the coral survives the bleaching event, thankfully this process is reversible with the symbiotic algae returning to the coral when conditions are more favourable. In this article, we explore this concept of colour being lost but able to return again, looking more closely at photoswitchable fluorescent proteins in coral.

There are many cases of fluorescence that we observe around us in the world, from natural phenomena such as glowing creatures in our seas, to man-made materials like fluorescent jackets and highlighter pens. Most naturally occurring fluorescence is due to fluorescent proteins, such as green fluorescent protein (GFP) from jellyfish, which absorb high energy photons from sunlight and emit them at lower energy generating colourful fluorescent light. The fluorescence of these proteins is possible due to the presence of ‘chromophores’, regions of high light absorption within the protein structure. These proteins have become a vital tool in molecular biology to visualise molecules within cells using fluorescence microscopes.

One particular example of reversible fluorescence is the GFP-like fluorescent chromoprotein cFP484 from the Clavularia genus (soft corals). Work by Henderson et al. looked at a number of variants of this protein including a monomeric teal FP (mTFP0.7), a bright and stable FP variant. mTFP0.7 gives off bright fluorescence at a wavelength maxima of 488 nm, leading to emission of cyan light. However, upon absorption of light at a wavelength of 458 nm, the protein is photobleached and the fluorescence quenched. Given time to recover in the dark, the fluorescence properties can be recovered within a few minutes. Furthermore, illumination of the photobleached mTFP0.7 at wavelengths between 360 - 400 nm increases the speed of fluorescence recovery. These properties make this FP ideal for use as a photoswitchable marker in fluorescence imaging.

When PIA absorbs light at 360 - 400nm wavelength it undergoes isomerisation from the planar cis isomer in the fluorescent form, to the non-planar trans isomer in the photobleached state. As well as this small change in conformation, there is also an impact on the surrounding amino acids in the protein structure. The most significant changes involve four amino acids surrounding the chromophore: Asn-63, Arg-70, Ser-146, and His-197. These conformational changes can be seen in the image below, which compares the region around the PIA chromophore in the fluorescent and photobleached states.

All these changes in side chain conformation are driven by the isomerisation of the chromophore, highlighting the knock-on effects that even small structural changes can cause. These structural changes result in significant disruption of the hydrogen bonding network around the chromophore and impact upon the electrostatics of the protein. All this leads to this fluorescent protein losing its ability to fluoresce, until the reverse isomerism occurs and fluorescence is reinstated.

The use of FPs in cellular imaging has now become routine in cell biology research. These tools allow the tagging of specific molecules with these proteins to enable visualisation of components within the cellular environment. FPs that exhibit reversible photobleaching provide another valuable tool to observe molecular location and transport in the cell. One of these FPs is called Dronpa, a molecule that can reversibly convert between green fluorescent and non-fluorescent forms depending on the wavelength at which it is irradiated. This interconversion between the photoactive and photobleached forms can be repeated numerous times within the same cell, allowing switching on and off of these fluorescent signals.

There are a number of benefits in the use of these reversible photobleaching FPs in fluorescence microscopy over standard FPs. When following the transit of molecules over time, this reversible method prevents the constant irradiation of the sample, which may cause photodamage to the FPs or the cell sample over time. Furthermore, the combination of multiple types of photoswitchable FPs can allow the selective visualisation of different molecules at different times, improving the clarity and resolution of the visualisation. The potential for engineering of these FPs could allow the fine-tuning of different fluorescent tags that can be used in the same cell sample and independently triggered, highlighting different target proteins at any one time.

The future of cellular visualisation looks bright - when you switch it on.

This artwork was created by Henrietta White from Saffron Walden County High School. Coral bleaching caused by rising water temperatures in our oceans is one of the most obvious markers of climate change. Many corals have a symbiotic relationship with algae, which protects them from strong light. But as the temperature of our seas rises, the algae may begin to disappear, exposing the coral to brighter light. Henrietta channelled her passion for protecting the ocean to create this beautiful artwork inspired by fluorescent proteins from coral, which emit bright and varied colours and absorb excess light. There are some promising signs that coral bleaching is reversible if our oceans are protected through urgent climate action.

View the artwork in the virtual 2021 PDB Art exhibition.