Ten years of training at EMBL-EBI

Building on our past, working for your future

In 2017, EMBL-EBI’s training programme turns ten years old! We’re celebrating throughout this year, so keep an eye on our latest news updates below and remember to follow us on Twitter @EBItraining.

As part of our celebrations we have made a travel-themed treasure hunt to give you a taster of the free resources and (sometimes quirky) data that EMBL-EBI has on offer. 10 clues will help you navigate EMBL-EBI resources and collect travel related data and earn a chance to win an iPad or Amazon voucher. The first clue will be released on 19 June.

To the treasure hunt

As a thank you to our delegates — the lifeblood of our courses — we are providing registration fee bursaries for many of our Wellcome Genome Campus-based courses throughout 2017 (one per course).

Successful course applicants will be entered into a random prize draw to win a 50% discount on their course fees. Simply apply for the training course of your choice in the usual way. Winners will be notified before attending the course.

Apply for an onsite course at EMBL-EBI

Throughout the year we will be featuring a series of ‘Top tens’, in which we’ll share some interesting, historical and surprising facts about the training programme.

The course instructors and organizers are very informative, supportive and friendly. The campus is an amazing setting which was great to be in.” 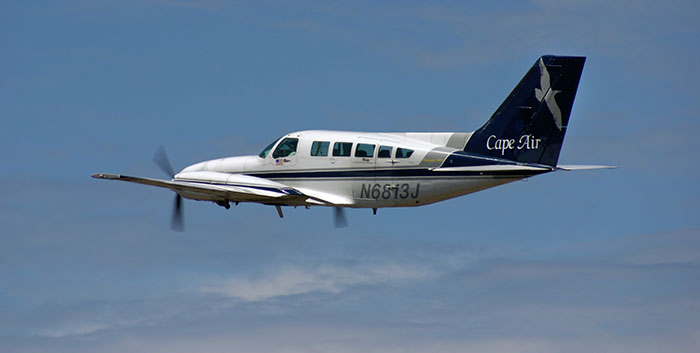 Emily Perry from Ensembl recalls a trip she took to deliver training at Bar Harbor, Maine. “I was somewhat surprised when they weighed me at check-in for my flight from Boston to Bar Harbor. This was weird. I understood why when I saw the plane…

...a ten-seater (including pilot) Cessna 402! Someone had to volunteer to sit next to the pilot, our bags were stashed in odd little cubbies in the wings and the fuel put into the plane had to perfectly balance the weight of its human cargo. The tiny airport at the other end proved a gateway to this wondrous little island.

I had gone to teach an Ensembl Browser Course at the renowned Jackson Laboratories, famed for their mouse and cancer research. I was lucky enough to have a couple of days to explore Bar Harbor, eating the fresh-caught Maine lobster and taking a wildlife boat trip where we saw some basking seals. Then it took a lot of early morning phone calls to find the one taxi driver on the island to catch my Cessna return flight to Boston, and from there on a normal plane to a conference in Baltimore.” 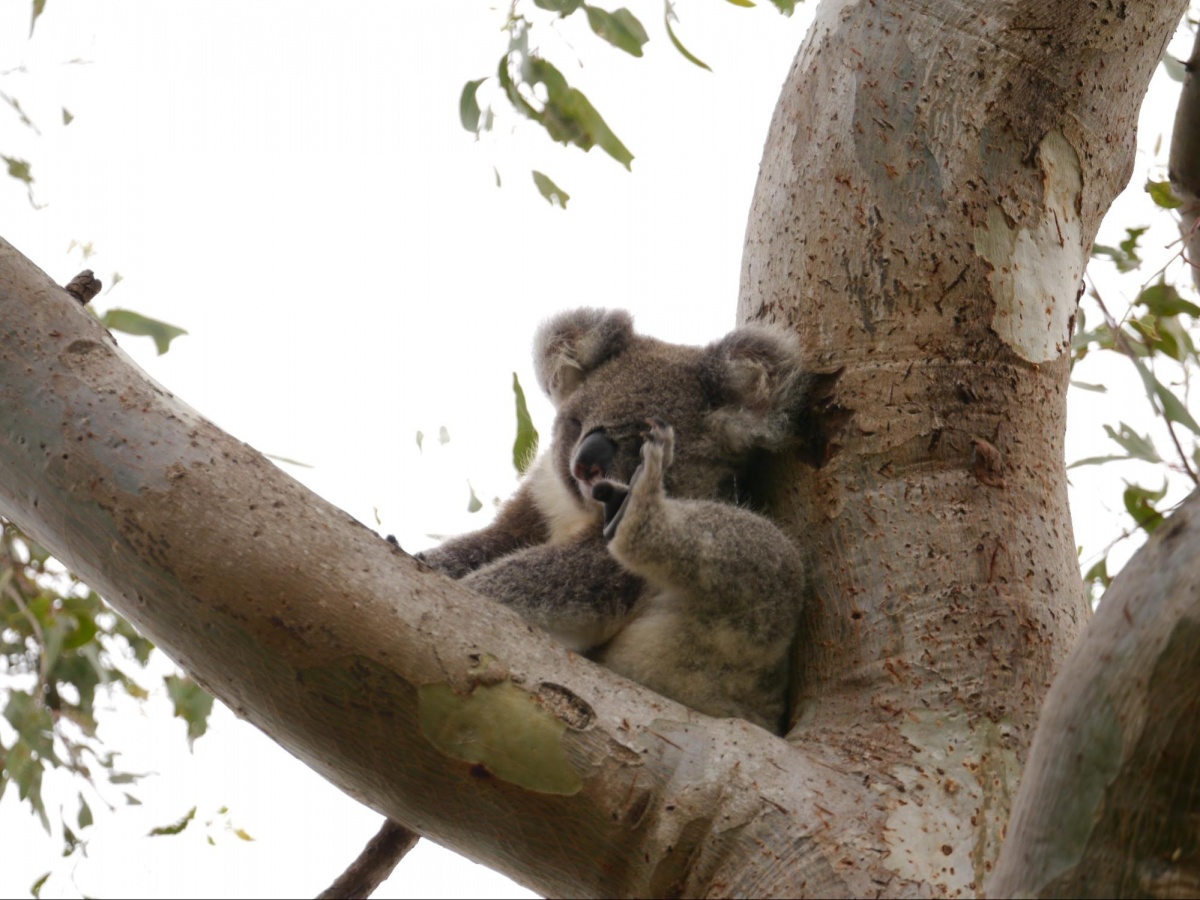 Australia is about as far away as you can get from Hinxton but that doesn’t stop us training there. We have delivered training workshops in Perth, Melbourne and Sydney – covering topics such as our sequence databases, mass spectroscopy data, and protein interactions. Sandra Orchard remembers a highlight of her visit being spotting a koala crossing the road.

To help support the bioinformatics community in Australia we have worked with EMBL Australia and Bioplatforms Australia to develop a train-the-trainer scheme. This allows us to spread our knowledge to those who are better located to deliver face-to-face training.

We still hold frequent Skype calls with researchers in Australia, but the time difference can make it a little odd. One of our trainers still denies delivering training whilst wearing their pyjamas for a late night webinar! Luckily we record our webinars and make them available in Train Online so anyone can catch up wherever they are in the world!

EMBL-EBI trainers have visited the Faroe Islands, located between Scotland, Norway and Iceland in the North Atlantic. The city of Tórshavn is the second most northerly training location we have been to, beaten only by a 2009 visit to Reykjavik. 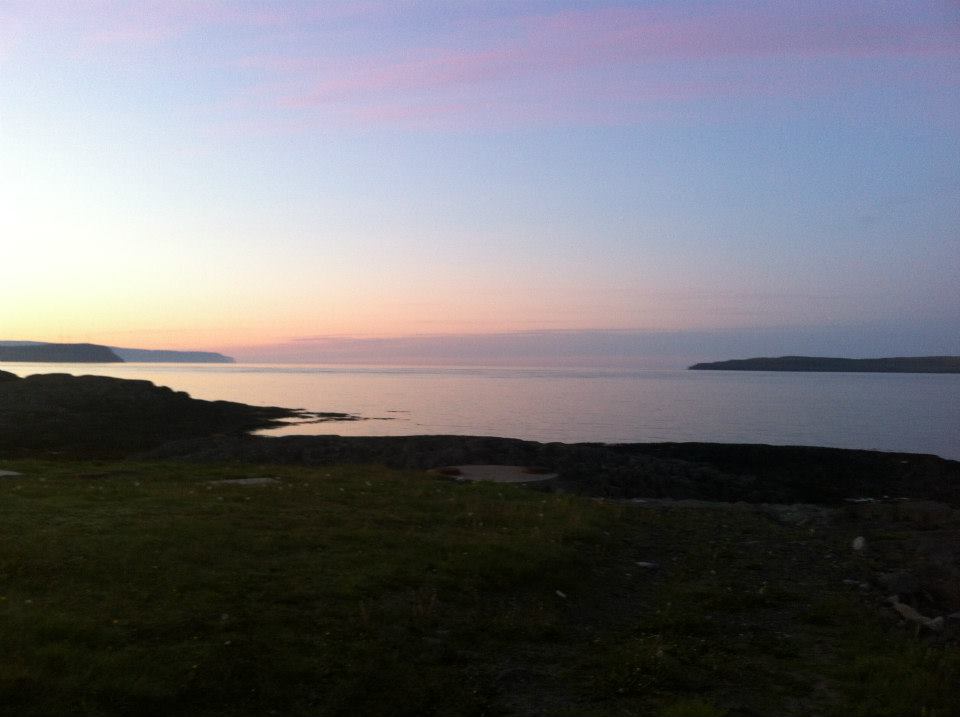 The first visit occurred in late November 2012, with a follow up visit in June 2013. During these trips our trainers met a diverse mix of researchers working in aquaculture, soil microbiology and population genetics, as well as healthcare workers and clinicians. We introduced EMBL-EBI, the wealth of biological data we host, and how researchers can begin accessing genomic data via ENA and Ensembl, the growing importance of this data in healthcare, and how to begin searching for biological databases via bioinformatics algorithms.

Bert Overduin and Tom Hancocks  joined both visits and got to experience the islands in both darkness and continual daylight. Tom remembers “Our first training workshop lasted from 9 am to 5 pm, starting and ending in the dark of night”. Six months later and on our return visit it barely got dark! Check out these two pictures to see the contrast in daylight - the first taken at 8 am in November, the second at midnight in June! 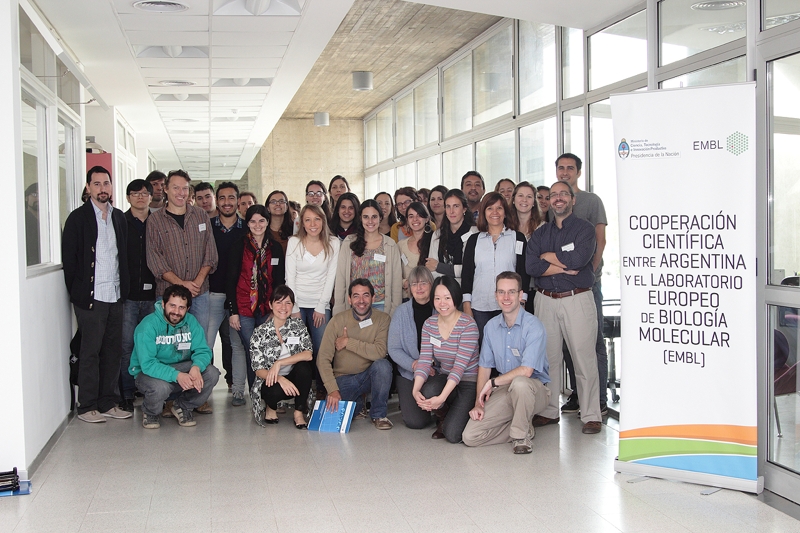 Like Australia, Argentina is an EMBL Associate Member State and joined the laboratory in 2014. The first activity requested on joining was that we deliver a bioinformatics workshop! The aim was to develop the skills of researchers across a diverse range of biological topics, especially in the area of plant and animal life sciences.

Our intrepid trainers Amy Tang, Sandra Orchard and Andrew Cowley ventured out to the Southern Hemisphere to train on accessing EMBL-EBI data, the Expression Atlas and IntAct databases. There were lots of great interactions with workshop participants and interesting questions asked, but the non-scientific highlight of the trip for our trainers was getting to sample local Argentinian culture. While staying in San Martin our trainers were invited to take tango lessons. Putting their best feet forward they all enthusiastically took part! Sadly there are no pictures to share with you of our fast-footed three strutting their stuff! 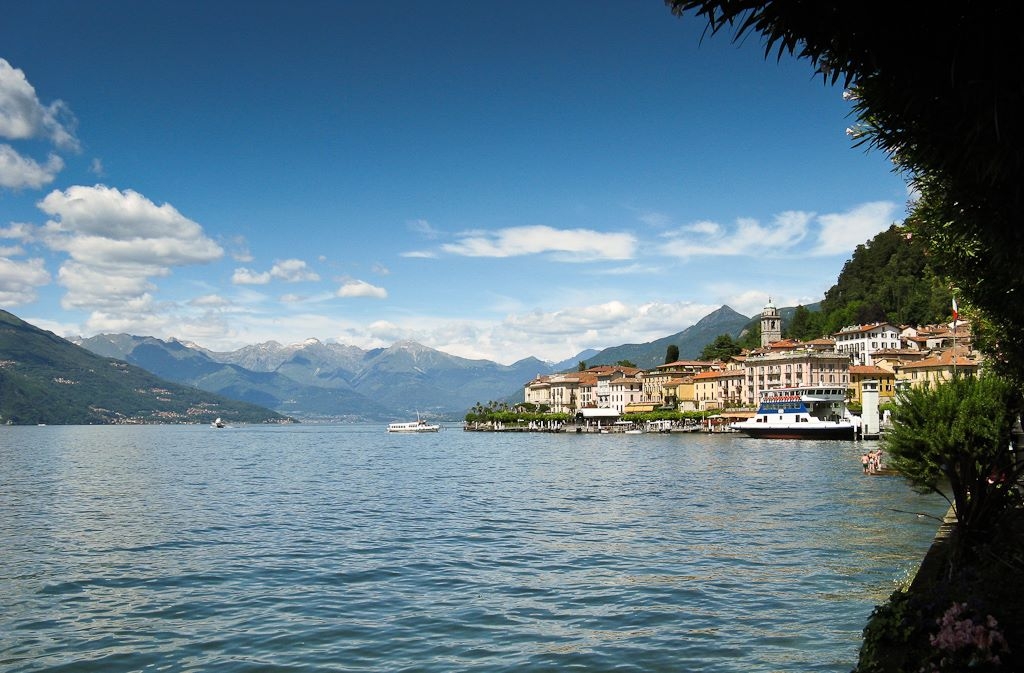 The students were enthusiastic and the hosts were extremely kind and accommodating. A particular treat that was enjoyed by all of the instructors was a delicious pizza dinner on the side of one of the Italian lakes (near Lake Como). Beautiful! 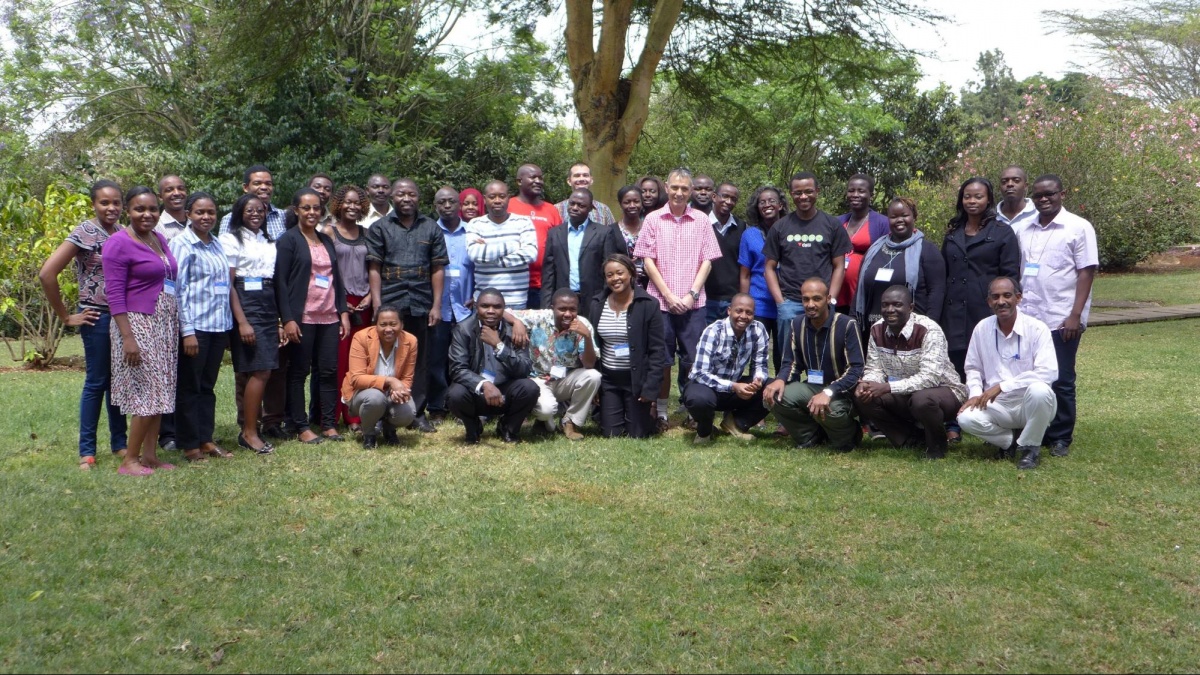 Blaise Alako, a bioinformatician with the European Nucleotide Archive, took part in our Ambassador Programme, which provides support for EMBL-EBI staff and visitors to venture to new locations and gain experience in training or scientific outreach. Blaise visited the International Livestock Research Institute in Nairobi, Kenya in 2013. At the time Blaise had no experience as a trainer, but the Ambassador Programme provided  tuition, materials and live support through a chat application from experienced trainers. This enabled Blaise to broaden his expertise in several bioinformatics resources and develop his training skills.

The week-long workshop brought together researchers from Kenya, Ethiopia, Sudan, Rwanda, Cameroon, Ghana, Tanzania, Uganda, Madagascar, Niger, Nigeria and Eritrea. The researchers came from a multitude of backgrounds - biologists, bioinformaticians, biochemists and geneticists. Blaise covered a range of resources including ENA, Ensembl and 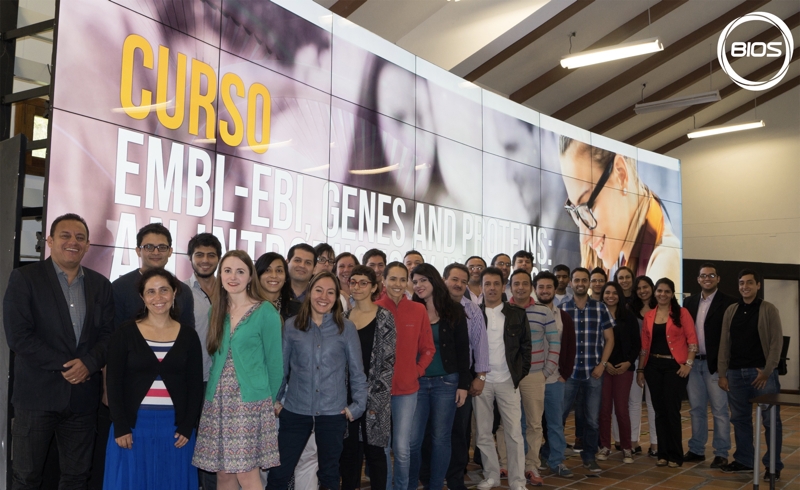 Technological extremes have been one feature of our workshops in Colombia - from One the huge, high-resolution screen in Manizales (32 monitors of 55 inches with a resolution of 66 million pixels, 9 by 3.2 meters) to a stick hastily brought in to act as a makeshift pointer.

As a result of our interactions with researchers in Colombia, we are now supporting the University of los Andes to provide postgraduate training in bioinformatics; we’re also leading a UK-AID-funded project (through the GCRF-RCUK collective fund) to build a network of Latin American centres of Excellence in Bioinformatics. 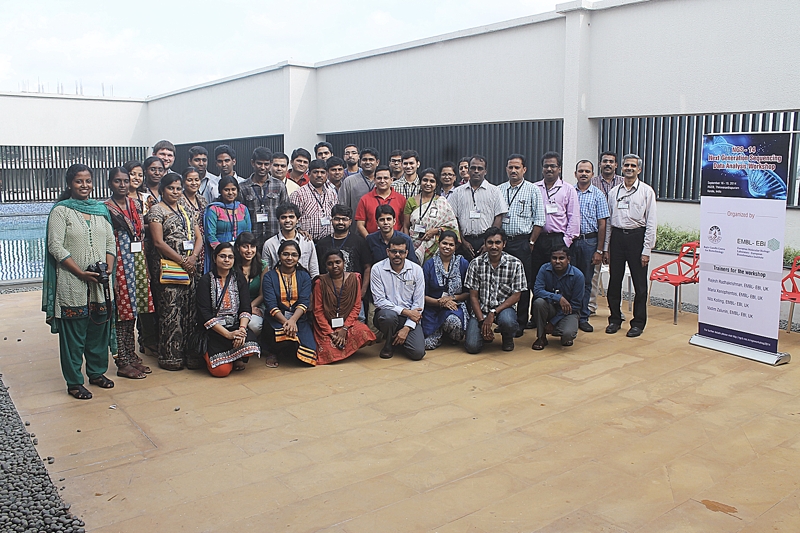 In January 2013 EMBL-EBI collaborated with the Centre for Cellular and Molecular Platforms in Bangalore (with Taslimarif Saiyed, Director and COO) and the National Institute of Biomedical Genomics (with Partha Majumder, Director) to deliver two extremely well received workshops on analysis of massively parallel sequencing data.

One of our long-term training goals at EMBL-EBI is to contribute towards strengthening bioinformatics capacity, especially in EMBL's associate member states and in countries that are working towards becoming EMBL Associate Member States. Our work with both institutes provided an excellent model for this capacity strengthening. Both programmes were delivered as team efforts between trainers local to the host institute and trainers from EMBL-EBI and the University of Cambridge. India has subsequently become an EMBL Associate Member State, and training will be a major focus of our interactions with India.

Throughout 2014 and 2015, with the help of a Brazil Partnering Award from the BBSRC, we delivered six workshops, in Campinas (2), Sao Paulo, Belo Horizonte (2) and Brasília; our themes included variation in animal genomics, metagenomics data analysis and industrial applications of biological data, to cater for research interests in livestock improvement, environmental protection and a thriving SME community. As part of this initiative, we invited our collaborators from Brazil to participate in train-the-trainer activities. Not only were their new-found skills immediately applied in two on-site courses (one on Animal Genome Informatics, one on Integrative -omics), but our train-the-trainer participants have gone on to deliver a number of courses back home. Finally, two of our participants in this project have joined us as partners in CABANA, an exciting new project funded by the Global Challenges Research Fund to strengthen research capacity throughout Latin America.

Tartu, Finland (and 32 other European destinations)

Between 2009 and 2012 we delivered 33 workshops around Europe thanks to support from the European Commission’s seventh Framework Programme, which funded the SLING project. Several of our hosts ultimately became node coordinators for ELIXIR, Europe’s distributed research infrastructure for biological data, and a series of networking sessions organised for our roadshow hosts and others was instrumental in nucleating a community of bioinformatics trainers in Europe, with shared views on best working practice for bioinformatics training. The second SLING roadshow, in September 2009, was hosted by Jaak Vilo, Head of the Estonian ELIXIR node. It took place at the Institute of Computer Science, University of Tartu, where we trained 41 participants on Ensembl, ArrayExpress, Reactome, the BRENDA database and a selection of protein resources. Other SLING roadshow hosts that played an important role in the formation of ELIXIR included SIB, CSC Finland, University of Ljubljana, Slovenia and University of Rome Tor Vergata, Italy.