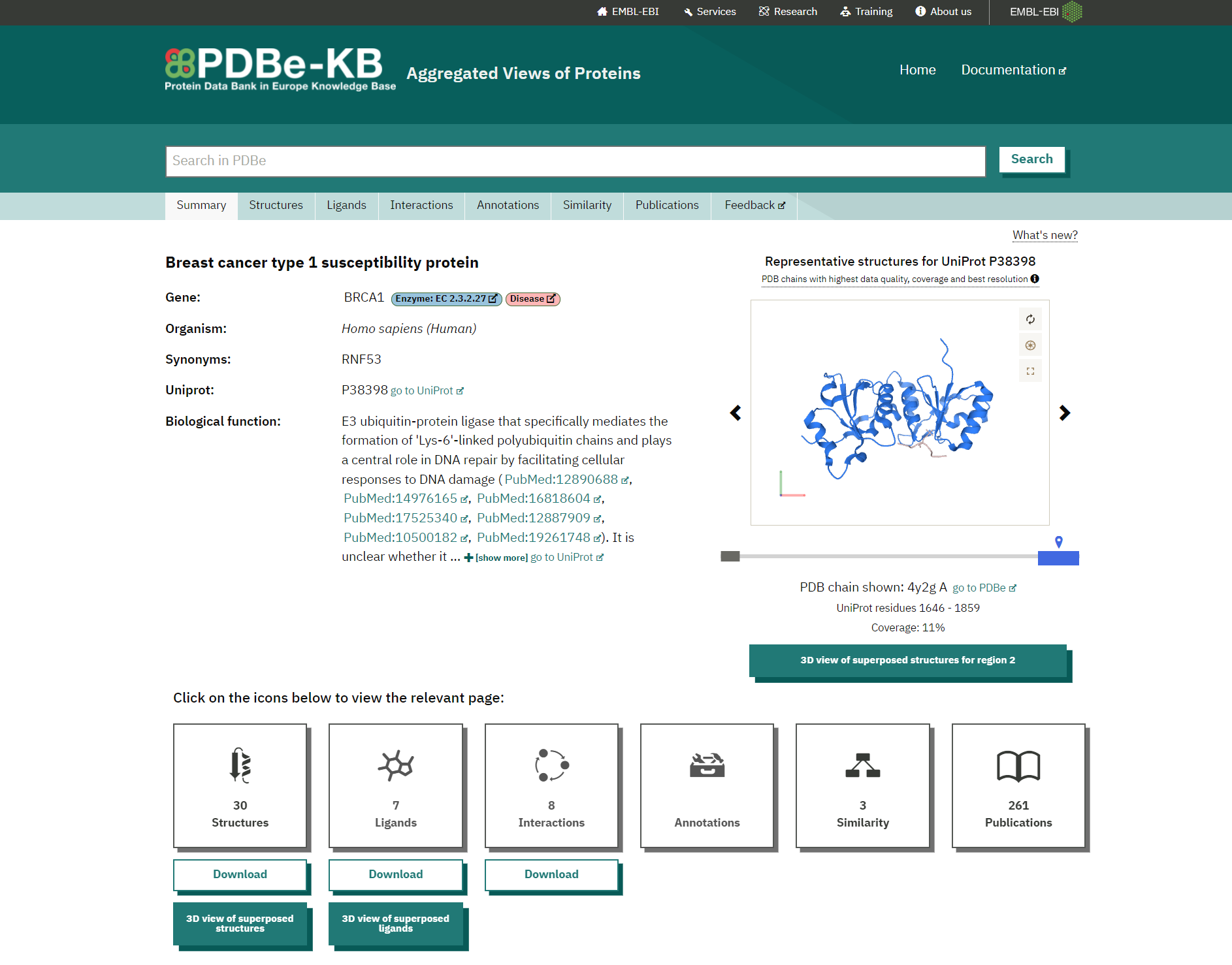 The PDBe-KB Aggregated Views of Proteins (https://pdbe-kb.org) have enabled our users to easily access collated structural and functional data from the whole PDB archive for their protein of interest. Thanks to recent updates, these pages are even faster and offer more opportunities to view the data in 3D with the Mol* viewer. To try out these new features now, visit pdbe-kb.org/proteins or visit an example page of Human MDC1.

PDBe-KB (Protein Data Bank in Europe - Knowledge Base) is a community-driven resource managed by the PDBe team, collating functional annotations and predictions for structure data in the PDB archive. PDBe-KB is a collaborative effort between PDBe and a diverse group of bioinformatics resources and research teams.

PDBe-KB contains data contributed by projects such as SIFTS and FunPDBe and aims to place structures from the PDB in their biological context.

PDBe entry pages traditionally focus on single PDB entries, with limited information on entries that are related to the same macromolecule. The PDBe-KB team is proud to present a new type of entry page, that focuses on full length proteins instead of single PDB entries. Currently, you can use PDB or UniProt identifiers of proteins to display all the related PDB data, from the list of all the available PDB entries, to functional annotations of ligand binding sites, macromolecular interaction interfaces, and related publications.

Structure Integration with Function, Taxonomy and Sequence (SIFTS) is project in the PDBe-KB resource for residue-level mapping between UniProt and PDB entries. SIFTS also provides residue-level annotation from the IntEnz, GO, Pfam, InterPro, SCOP, CATH, PubMed, Ensembl, Homologene resources. The information is updated and released every week at the same time as the release of new PDB entries and is widely used by resources such as RCSB, PDBsum, Pfam, SCOP, InterPro. 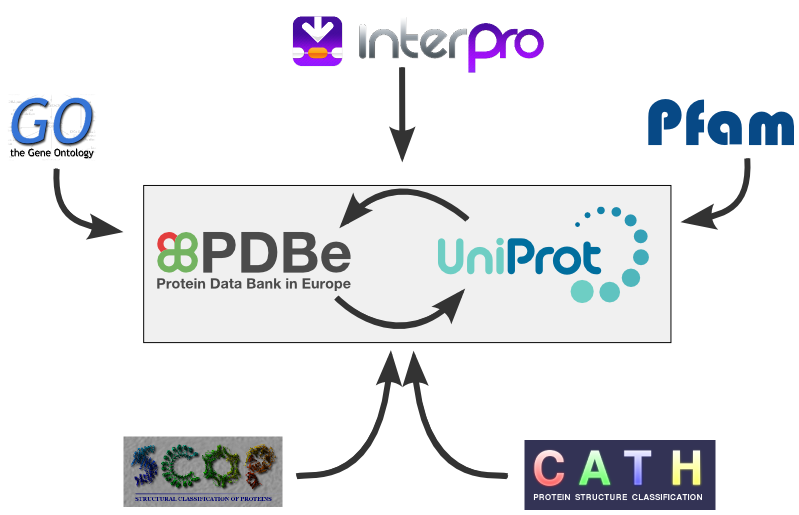 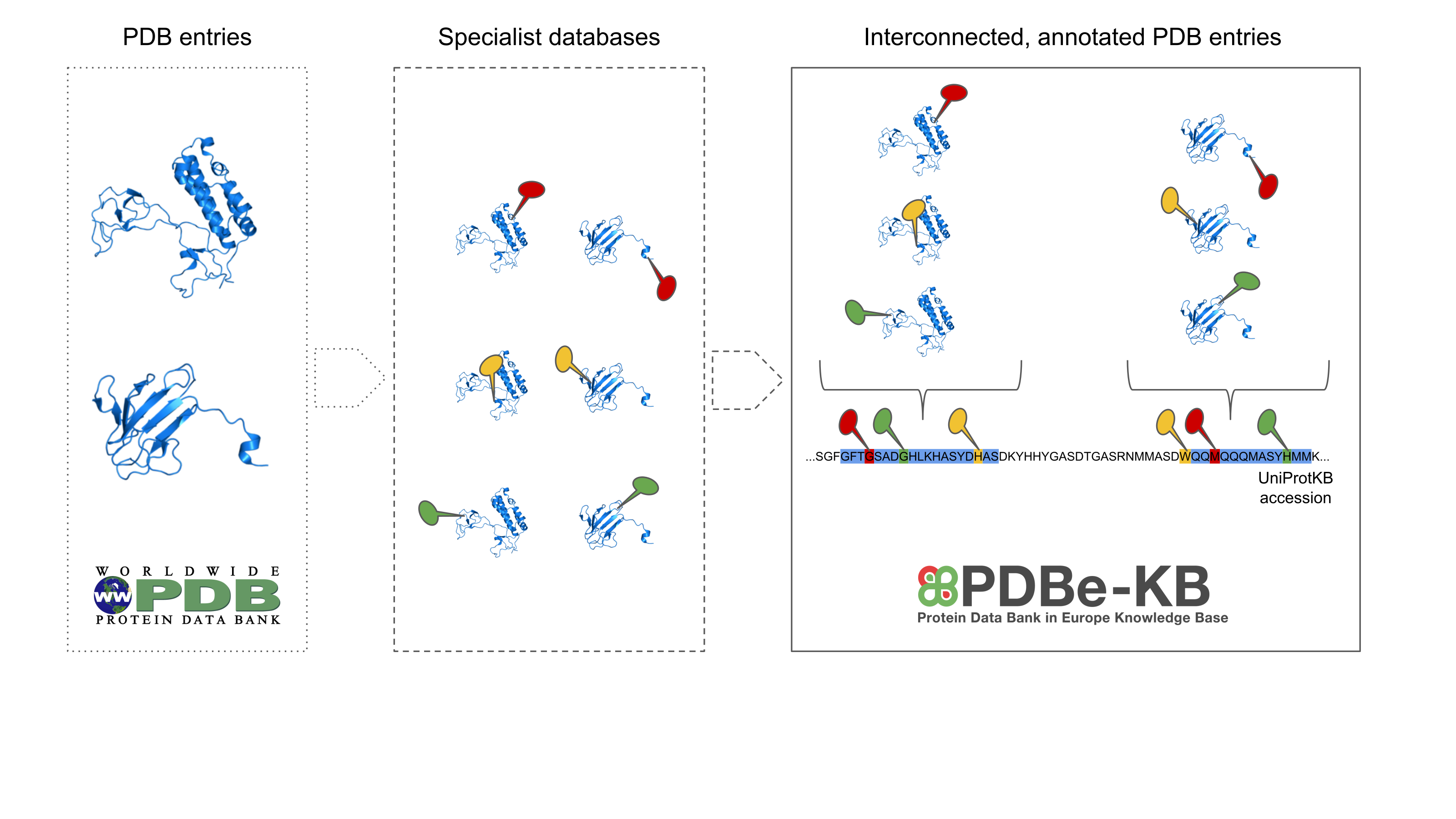 Cofactors are essential for many enzyme reactions. The Protein Data Bank (PDB) contains several enzyme structures, many bound to cofactor or cofactor-like molecules. In collaboration with the Thornton team, we have implemented a semi-automated annotation process that identifies such molecules in the PDB. The information is updated weekly with each PDB release and is stored in the PDBe database. The up-to-date information is made available via the PDBe REST API and query system, and can be visualised on the PDBe entry pages.

The goal of the Genome3D project is to provide predicted macromolecular structures for structurally uncharacterised protein sequences, thereby helping biologists exploit structural data to understand protein functions. As part of the project, one of the current objectives is to increase the volume of predicted structural data (i.e. map CATH and SCOP protein superfamilies, determine evolutionary conserved residues) and integrate it into the major central data repositories InterPro and PDBe.

The PepVEP project aims to use existing services from UniProt, the EBI Variation team, the Thornton team and PDBe to implement an integrated platform for interpreting the functional effects of variants. The project concentrates mainly on developing user interface to depict variation data on protein sequence and structure. PDBe is adding additional API calls to its existing API to provide structural residue information for the platform and aims to extend the sequence feature viewer to provide these data on PDBe pages.

Finding RNA molecules in the PDB has previously been difficult due to the lack of standard naming and classification, compared to proteins. Many RNA molecules are classified by Rfam, a database of non-coding RNA families based at the European Bioinformatics Institute (EMBL-EBI). We’ve worked together with our colleagues at Rfam to make use of their mappings of RNA molecules present in the PDB. As part of PDBe-KB, we are continuing to work on other features that will improve representation of RNA molecules at PDBe.