The PDBe entry pages now have a new, interactive, RNA topology viewer developed in collaboration with the RNAcentral and Rfam teams at EMBL-EBI. This new viewer helps users to visualise the secondary structure of RNA molecules, integrated with sequence-related annotations and 3D visualisation.

The new RNA topology component on the PDB pages is based upon a new method for RNA topology visualisation called R2DT, published in Nature Communications. The R2DT software was developed by a large team across multiple organisations, including scientists from EMBL-EBI. It uses a library of RNA secondary structure templates to generate standardised topology diagrams for a wide range of RNA molecules. This use of templates and standardised secondary structures means that these visualisations are displayed in familiar orientations for RNA researchers, and allows easier comparison of related RNA structures. 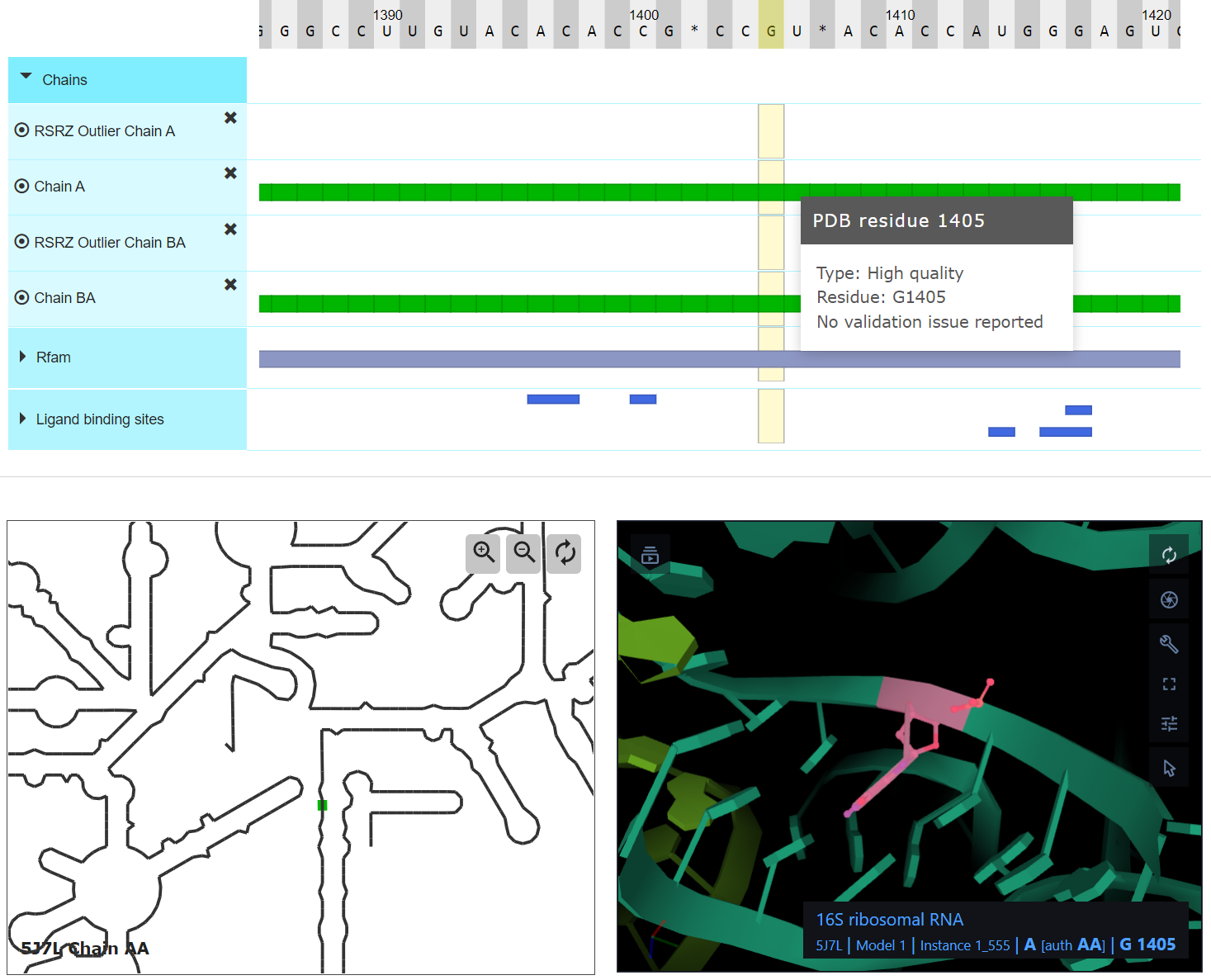 Figure 1: Screenshot displaying the components on the macromolecules pages for PDB ID 5J7L. The RNA topology component (bottom-left) interacts with both the ProtVista sequence component (top) and the Mol* 3D molecular viewer (bottom-right).

PDBe now runs the R2DT software (link to R2DT in GitHub) on all the RNA sequences in the PDB, generating topology data for over 90% of all RNA-containing entries in the PDB. This means generating RNA secondary structure data for over 5,000 entries in the PDB. Furthermore, this method has been integrated into the PDBe weekly release process, ensuring that topology data is generated for all new RNA structures and ensuring the data is always up to date.

The resulting topology diagrams are displayed on the Macromolecules pages on the PDBe website as an interactive Javascript web component. These pages can be accessed per each molecule from the PDBe entry pages using the ‘molecular details’ link. Alternatively, these pages can be accessed directly from the ‘macromolecules’ tab of the PDBe search pages by clicking on the name of the relevant RNA molecule. The addition of this new component to these pages enables interaction between the ProtVista sequence component and Mol* 3D viewer on these pages, allowing users to easily explore the RNA molecules at different levels of structure.

Figure 2: Comparison of RNA topology display for 2 RNA structures. The glmS ribozyme in PDB entry 3L3c is shown on the left and the large subunit ribosomal RNA from E. coli in PDB entry 1c2w on the right.

Aside from interaction with the other components on the page, the RNA topology viewer is itself interactive, with options to zoom in and out of the secondary structure view. In the case of smaller RNA molecules, such as the glucosamine-6-phosphate riboswitch ribozyme (glmS ribozyme) in PDB entry 3L3c (figure 2, left), highlighting of individual bases is clear enough from the expanded view. However, for larger RNA molecules, such as the large subunit ribosomal RNA from E. coli in PDB entry 1c2w (see figure 3, right), the option to adjust the zoom, and therefore detail level, can help distinguish individual bases and their interactions.

The RNA topology viewer at PDBe is open-sourced (https://github.com/PDBeurope/pdb-rna-viewer) and work is currently underway on the next version of the topology viewer that would display nucleotides and intermolecular interactions, including non-canonical base pairs. In the meantime, to get more detailed secondary structure diagrams the users can use the R2DT web application.

We hope that you find this component useful for visualisation and interpretation of RNA molecular structure. If you have any questions or feedback, then please use the ‘feedback’ button at the top of any PDBe page to contact our helpdesk.