What the cat dragged in..

At a time when we are constantly aware of our health and our relationship with the microbial world it is perhaps easy to forget that our pet companions are just as vulnerable to their own assortment of microbial pathogens.

The Caliciviridae are a noteworthy family of viruses responsible for a wide range of vertebrate diseases. Affected species include dogs, cats, pigs, cows, humans, rabbits, and marine mammals, and a broad spectrum of disease is observed depending on the specific virus. For example, the calicivirus responsible for Rabbit haemorrhagic disease (RHDV) frequently leads to sudden death, whereas Porcine Enteric Caliciviruses cause a survivable bout of gastroenteritis. In cats, the Feline Calicivirus (FCV) is responsible for approximately half of all upper respiratory infections in domestic cats. Big cat species can also become infected by FCV and are especially vulnerable to severe disease in captivity. At present, transmission among wild big-cats has only been shown in Cheetahs.

FCV transmission can occur through the air or by contact with other infected cats. Contaminated objects can also lead to infection, with the virus particularly stable in the environment, in some conditions surviving for many weeks on dry surfaces. As such, FCV is highly contagious and represents one of the most common pathogens of domestic cats. Vaccines against FCV do exist and are recommended to be given annually, however FCV is still considered endemic in most populated areas.

The FCV virus itself is classified as a small non-enveloped single stranded positive-sense RNA virus - as are all members of the Caliciviridae.

To unpack these descriptions:

The complete FCV virus is shown in Figure 1 (6GSH). The full structure takes the shape of a ~40 nm icosahedral (football-like) particle predominantly containing 180 copies of a single protein - the major capsid protein (VP1). The VP1 protein is present in three distinct conformations in the symmetrical assembly: two comprise an “A-B” dimer which arranges with 5-fold symmetry to form a large pocket (lower left), whilst the third, a “C-C” dimer (lower-right), serves to stabilize the association of multiple “AB” pockets. The C-C dimers also house the so-called P-domain (in two sections, P1 and P2) that “Protrudes” from the capsid and is involved in interactions with the host cell. The shell-domain, “S”, forms the primary layer of the capsid. 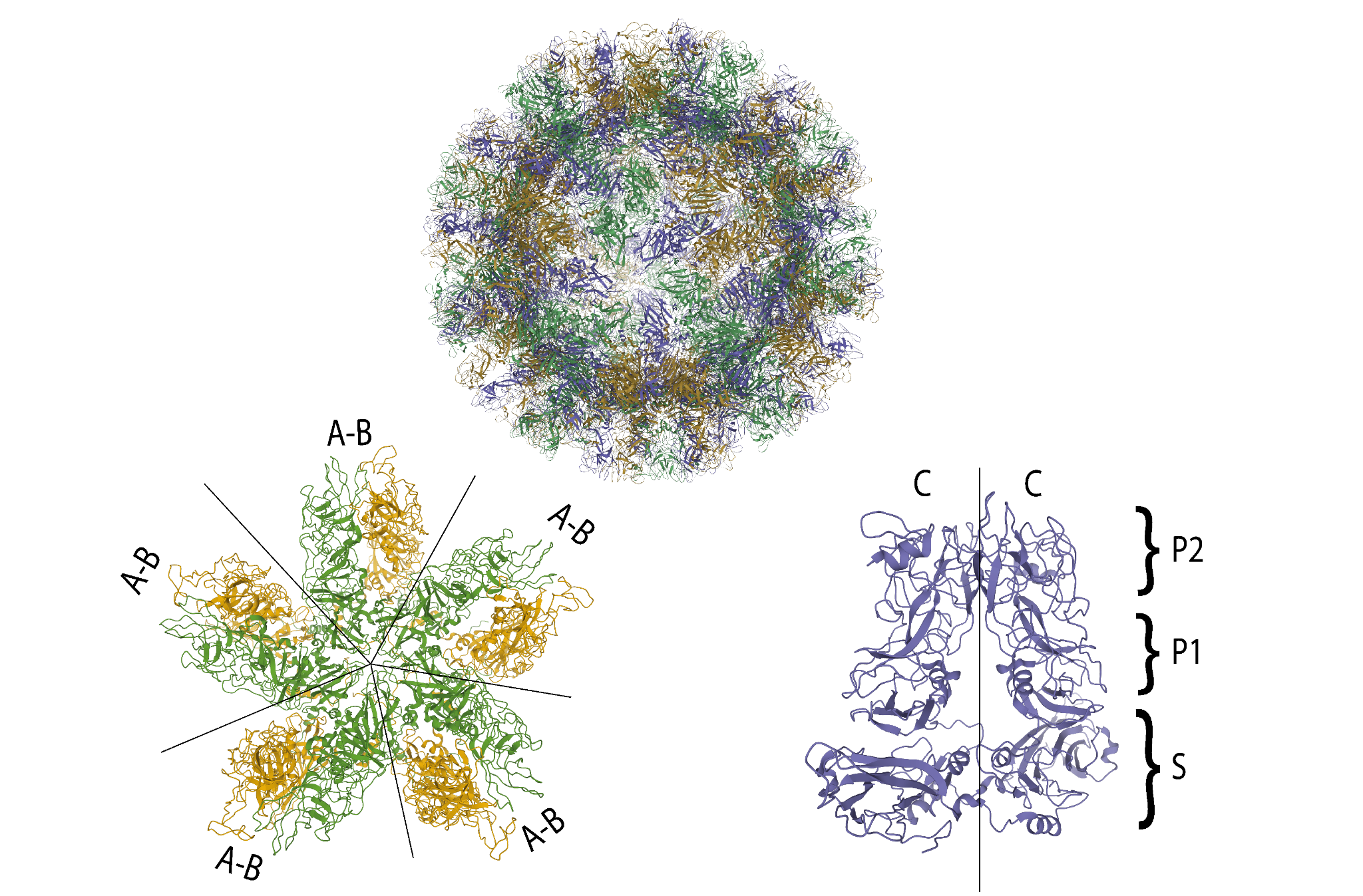 Whilst four of the five classes of Caliciviridae will probably be unfamiliar to you by name, chances are you’ll be painfully aware of the fifth: Norovirus. Human Norovirus (colloquially the “Winter Vomiting Bug”), is the most common causative agent of gastroenteritis worldwide. Like FCV, as a non-enveloped particle, Norovirus is an extremely hardy and contagious pathogen. It is even resistant to hand sanitizer! Whilst most people will recover from the extremely unpleasant symptoms within 2-3 days, a small number will require hospitalization, and for some patients it may even prove fatal. Norovirus-linked gastroenteritis is therefore of great significance to human health and the pharmaceutical industry.

However, Human norovirus has been notoriously difficult to cultivate in the laboratory, which makes investigations into its pathogenic mechanism and viral characteristics extremely difficult, if not impossible. Fortunately, cultivation conditions for a number of related Caliciviridae have been found, and researchers are able to readily exploit Feline Calicivirus, Porcine Sapporovirus, and Murine Norovirus to help draw conclusions about the Human disease and identify potential treatments.

The examples below highlight two structural studies where this approach has been taken, both of which relied upon Mouse Norovirus.

The Caliciviridae were originally named according to the hosts in which they were first identified, owing to perceived host-tropism (or “host-specificity”), however a great deal of cross-species transmission is now known to occur - both by natural interspecies interactions and from contamination due to human activity. Significantly, ocean-dwelling Caliciviridae hosts are known to be viral reservoirs for the transition to terrestrial animals. An often discussed case is the Vesicular exanthema of swine virus (VESV), which causes Foot-and-Mouth like symptoms in Pigs. Eradicated from United States agriculture in the 1950s, the origins of VESV have since been traced to the San Miguel Sea Lion Virus, to which it is all-but identical, and able to cause disease in swine under experimental conditions.

Animal-to-human transmission (zoonosis) has thankfully only been observed in a handful of cases involving Caliciviridae. However the ease of general Caliciviridae cross-species transmission is a cause for concern - one which should be appreciated further afield now more so than ever. Worse still, virologists are aware of a large number of transmission routes that bridge the gaps between air, land, and sea, and which could facilitate future zoonosis.

Among Humans, Norovirus outbreaks have in fact already been responsible for a number of domestic and international pandemics since the 1990s. Interestingly, Norovirus infection is often confused with food poisoning, not only because of the shared symptoms, but frequently due to the identification of food and food-preparation sites at the epicenters of viral outbreaks. Norovirus is in fact the leading cause of foodborne illness in most developed countries and our understanding of Norovirus transmission suggests the main driving forces behind outbreaks stem from either infected food-handlers or contaminated produce. Shellfish contaminated by ocean sewage disposal is a known high-risk example. Recent research has shown that, far from being passive actors, oysters (specifically glycans of the oyster gut) are in fact directly bound by the Norovirus capsid proteins, which adds molecular support to the observation that such viruses persist far longer than expected in shellfish species. More interestingly, the identified oyster glycans significantly resemble human blood group antigens - which are also important in the Human-Norovirus infection process. Whilst there is no evidence to suggest Norovirus is an active pathogen of shellfish, their ability to act as concentrated viral reservoirs is therefore already of concern for Human health. And yet Human activity is the cause for this contamination. Whilst we shouldn’t need another reason to stop polluting our oceans, hopefully we won't be looking back with regret in the face of the next global pandemic - whether Humans are the victims, or the oysters!

Jiaxi Xie is a year 11 student from Viewbank College Australia.

“I chose to incorporate the feline Calicivirus in my artwork. This virus causes upper respiratory and oral infections in cats, infecting cats throughout the world including both domestic and exotic species. Calicivirus is one of the more common infections and can cause ulcers, lameness, high fever and even severe depression in cats. I have used the patterns and shape of the virus in the background of my piece as though resembling a growing issue and have used a common house cat as the spotlight to show that all cats no matter their species or size can be threatened by this illness.”