From toxin to remedy

The first artwork in our 2020 calendar is a stunning combination of venomous beasts and protein structures. We are tuned to be afraid of these poisonous creatures, but what more can we learn about them and their ‘biological weapons’?

The species of our world exist as a balance between predator and prey, each trying to get the edge over their counterparts to survive. One key evolutionary survival trait is the creation of toxins - poisonous molecules created by biological organisms. These molecules have been employed by predators and prey alike, ranging from the incredibly deadly poison of the pufferfish, to a painful, but usually minor, bee sting. In some cases these so-called toxins can actually have some beneficial effects and are therefore very interesting examples to study for future therapeutics. It is one of these examples that we will be focusing on in this piece.

The black mamba is an extremely venomous snake, a typical bite rendering a human unconscious within an hour. Unless the appropriate antivenom can be provided in time, it is usually fatal. The venom itself is a complex cocktail of toxins, containing around 40 different proteins, each contributing to the deadly effect of the venom. Some of these components are dendrotoxins which interact with ion channels and stimulate an excitatory effect. Other proteins within the venom actually have the opposite effect, inhibiting the nervous response and leading to paralysis. However a final group of toxins, the mambalgins, have a very different effect on the victim of the bite and it is one of these that is the focus of this month’s artwork.

Mambalgins are part of a protein superfamily called the three-finger toxins (3FTx), so called due to the three long, thin domains that make up the overall peptide fold. Each of these domains is composed of a pair of beta strands, with a loop structure at the end of the ‘fingers’. This fold structure is highly conserved in the superfamily, yet these proteins have a wide pharmacological range of effects. Most members of the family, however, act as neurotoxins and inhibit some form of intercellular signalling, including the family of mambalgins. However mambalgins are also an outlier from this family, as rather than causing a typically toxic effect, they instead have an analgesic effect, relieving pain in the recipient. But what makes them different? 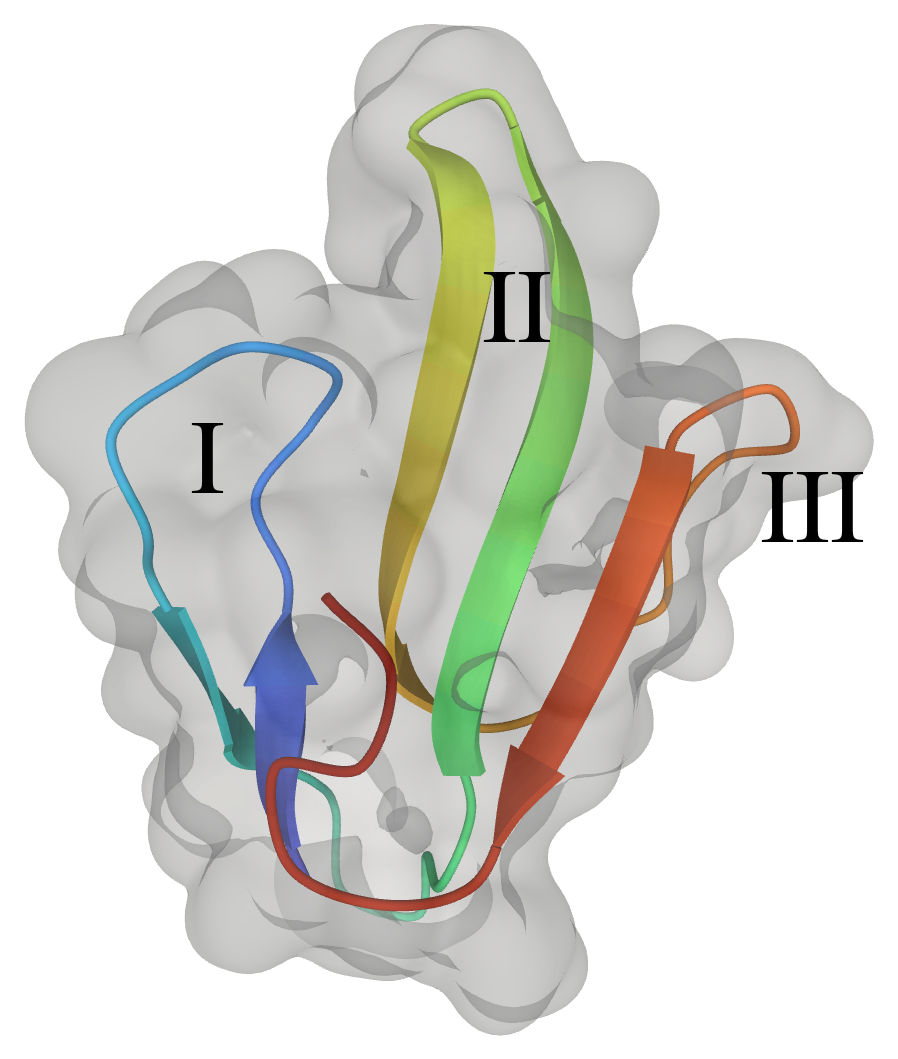 An example of a 3-finger toxin (PDB entry 1qkd), displayed as cartoons and coloured by sequence ID, with a grey semi-transparent surface. The three ‘finger’ domains are labelled with roman numerals.

The class of mambalgin proteins are inhibitors of acid-sensing ion channels (ASICs), receptors implicated in the pain pathway. It seems that mambalgins do not actually have any typical toxic effect and, despite their delivery in the black mamba venom, are instead found to be pain-relieving peptides. It is this that makes them very attractive pharmacological targets, especially given they appear to lack certain side-effects of the more common opioid receptors, such as morphine. There is significant interest in understanding more about these peptides, particularly in understanding how the peptide structure relates to its function.

Putting a finger on the differences

There are 5 structures of mambalgins in the PDB, including 3 X-ray diffraction structures of mambalgin-1 solved by Mourier et al. These structures highlight some of the structural features of the mambalgin family that make them distinct to others in the 3FTx family. Firstly, the III-finger was found to have higher B (temperature) factors than other regions of the structure, suggesting significant conformational flexibility, a phenomenon not seen in other structures of the 3FTx family. The authors could also determine the location of 3 residues, Phe27, Leu32 and Leu34, thought to be important in binding to ASICs. These residues are located along the surface of the II-finger, which was also found to be much longer in the mambalgin structures than in other structures from the superfamily. 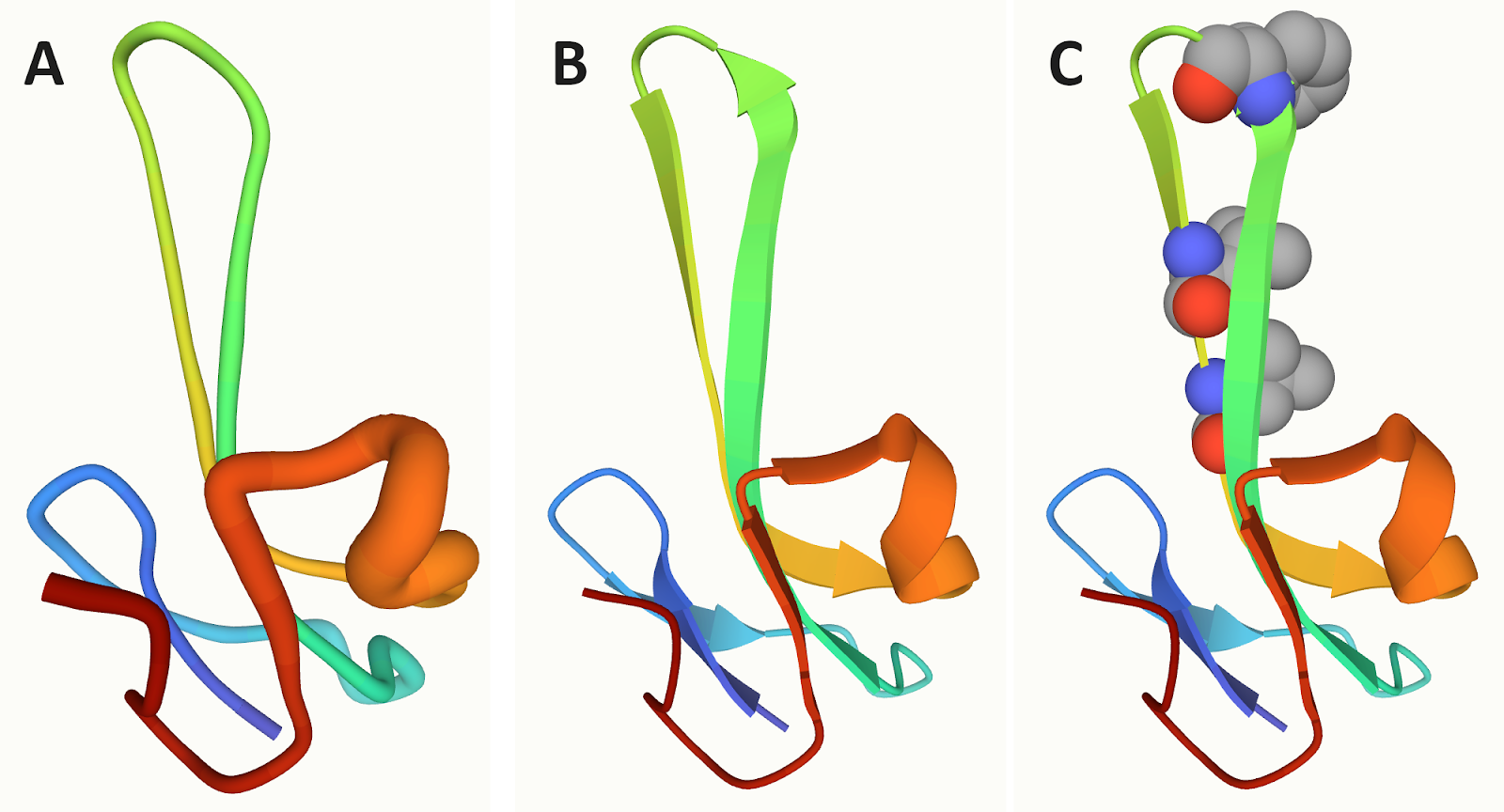 It seems that this extended hydrophobic surface on the II-finger of mambalgins is important in ASIC binding specificity and the consequent pain-relieving effect. If we can understand more about this interaction and how it can be mediated, perhaps it can help direct new therapeutics for pain relief. It seems the future of snake toxins is surprisingly painless.

This artwork was created by Ayshini Senadeera from The Perse School, Cambridge. Ayshini was interested in researching the ‘evolution of biological weapons’, and asked why some animals develop harmful toxins while most mammals and birds do not. This pen and ink drawing is a representation of her toxin-related findings.