The artwork for July in our PDBe 2020 calendar is inspired by a protein that’s vital for the determination of sex in mammals. One small interaction between this protein and DNA can determine whether an embryo develops as male or female.

In mammals, genetic sex is determined by the two sex chromosomes X and Y, with two copies of X (XX) for females and one copy of each (XY) for males. Despite this simplicity of the genetic definition of male and female, there is much more to the process of defining male and female characteristics in a grown adult. The genetic sex of XX or XY is determined at the point of fertilisation, when the sperm cell fuses with the oocyte (egg cell), however the development of sex-specific organs happens during embryo development. This means that there is the potential for the phenotypic sex, i.e. the observed sex at birth, to be different from the genetic sex.

The development of mammalian sex organs is a relatively simple process, involving only a small number of proteins. Two of the key proteins in this process are ‘doublesex and mad-3 related transcription factor 1’ (DMRT1) and ‘forkhead box L2’ (FOXL2). These proteins have essentially opposite actions, with DMRT1 involved in the development of male sexual organs and FOXL2 in development of female sexual organs. DMRT1 has been well studied and here we will discuss what is known about its function in mammalian sex determination. 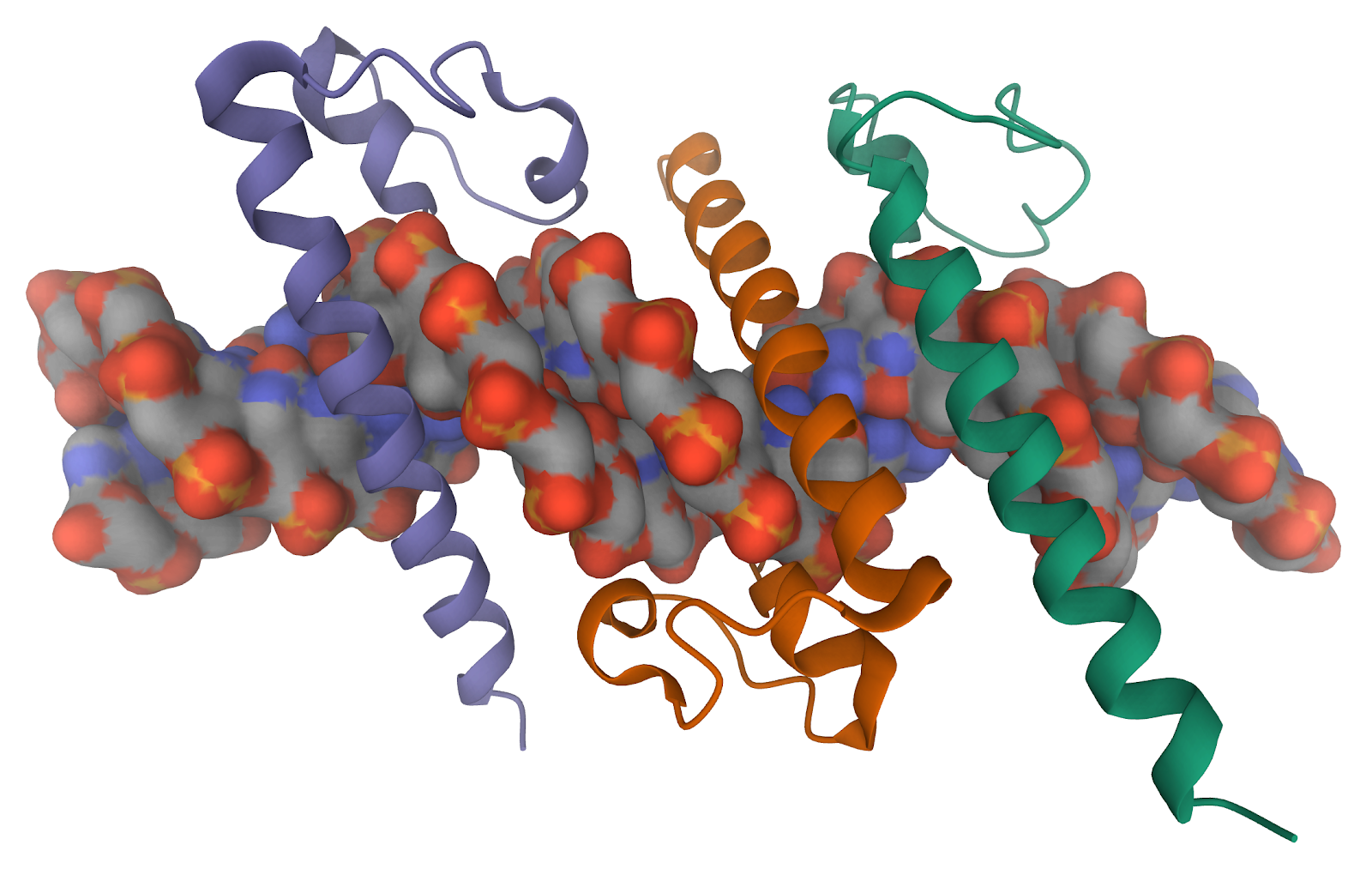 DM domains of DMRT1 bound within the major groove of DNA in PDB entry 4yj0. DMRT1 proteins are shown in cartoon format and coloured by chain, with DNA shown in surface representation and coloured by element type.

DMRT1 is part of a family of transcription factors, with DMRT6 and DMRT7 also involved in embryo development. It regulates the development of male sexual organs by controlling the expression of many other genes important to sex differentiation. Though it is found in both male and female embryos during early stages of embryo development, DMRT1 is only expressed in male embryos from the stage when sexual organs begin to develop. It has been observed to promote different genes depending on other proteins it interacts with, with a variation of effects seen during DMRT1 expression at different stages of embryo development. However, DMRT1 is of such importance in regulation of the whole process that even a single point mutation in DMRT1 can lead to development of female sex organs in XY embryos.

Looking at the structure

The key region of the DMRT1 is the DM domain, which binds to specific regions of DNA. The only structure of DMRT1 in the PDB (4yj0), includes the DM domain of DMRT1 bound to a stretch of DNA. The structure highlights how similar the DM domain is to Zinc finger domains - another DNA binding domain involved in a range of different processes and discussed in a previous featured article. The DM domain binds to the DNA through a number of positively charged amino acids forming non-specific interactions with the negatively charged phosphate backbone. In addition, the protein also interacts with specific sequences in the DNA via pairs of recognition helices that sit in the major groove of the DNA. Specifically, the amino acids Arg111, Val119 and Arg123 interact with specific bases in the DNA and appear to be most important for the function of DMRT1, highlighted in the image below. 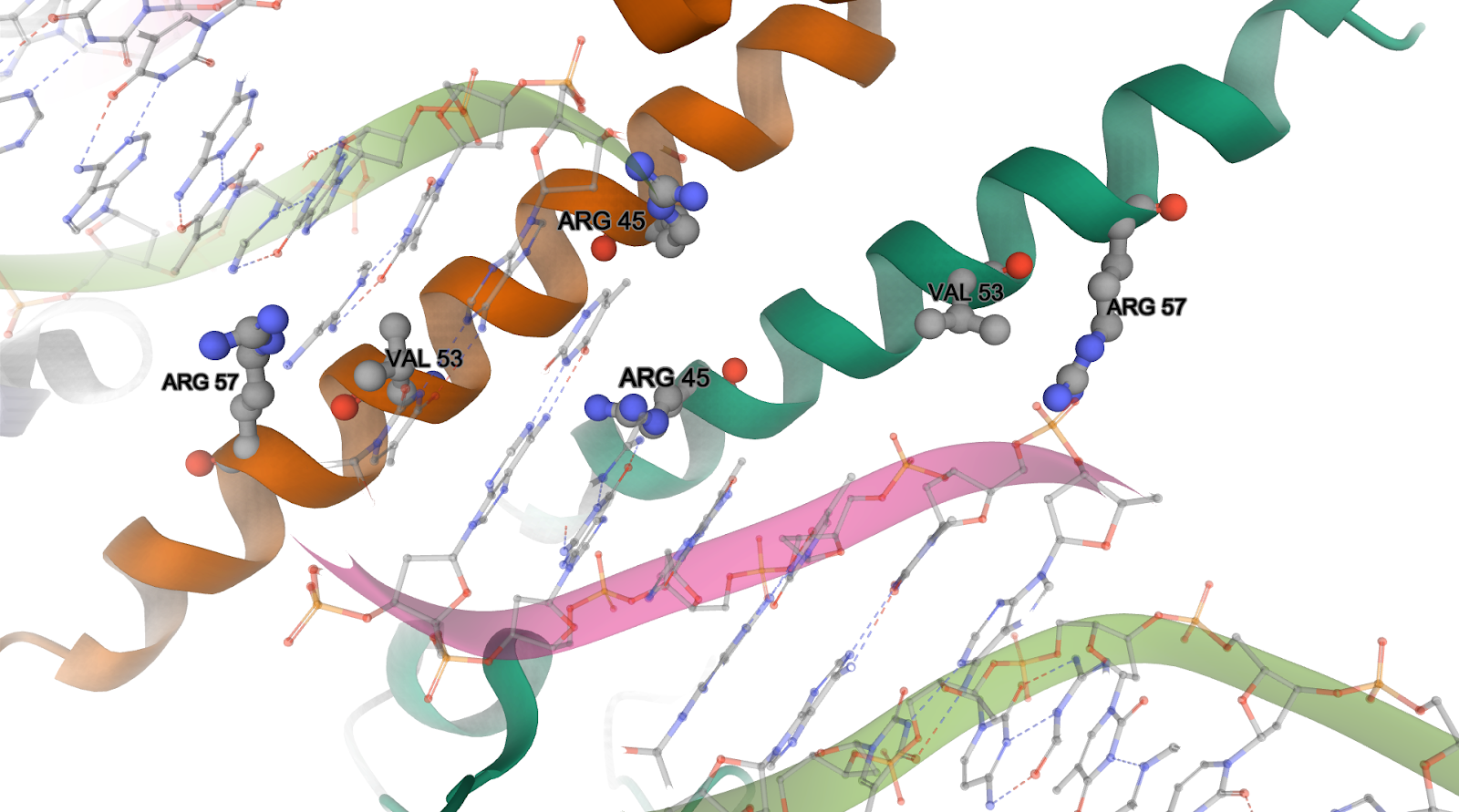 The amino acids Arg111, Val119 and Arg123 (in bold ball and stick representation) interact with bases in the major groove of the DNA helix (shown with light ball and sticks and ribbon backbone).

As previously mentioned, DMRT1 is vital in the development of sexual organs in the mammalian embryo. There are various conditions which can lead to the development of female genitalia for individuals with XY chromosomes, known generally as complete gonadal dysgenesis (CGD). A single point mutation of Arg111 in DMRT1 can cause this complete reversal of sexual phenotype, highlighting the importance of this specific protein-DNA interaction in the whole process. There is still much to learn about the proteins involved in sexual differentiation, however it is clear that it is not as simple as XX or XY.

This artwork, created by 13-year old Daniel Chen of The Perse School (Cambridge, UK), was created using a medium of chalk and charcoal. He took inspiration from the interactions between DMRT proteins and DNA in PDB entry 4yj0.