The February image in our 2020 calendar presents an artwork exploring the link between DNA and its interaction with a Zinc finger protein.

Around 700 proteins contain a zinc-finger motif, making it one of the most abundant protein domains in the human genome. The first clue that ZnF domain was vital in recognising DNA sequences came in 1988, when a transcription factor TFIIIA was isolated from frog eggs which contained a row of 9 zinc fingers. 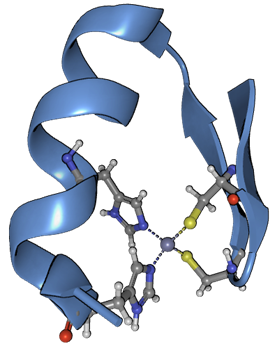 Each ZnF domain contains a short stretch of 20-30 amino acids, with conserved cysteine and histidine residues that folds independently forming a compact ‘fingerlike’ structure. This stable scaffold consists of an α-helix and β-sheet, held together by Zn ion. The ‘fingers’ act as interaction modules for binding DNA, RNA, protein, and lipid substrates and rarely undergo conformational changes upon binding their target.

Zinc-finger domains have evolved to perform specialized functions. As varied as this domain’s sequence, structure and binding modes are, so are its diverse set of functions. ZnF are involved in several cellular processes like DNA recognition, DNA repair, RNA packaging, transcriptional activation, regulation of apoptosis, protein folding, and assembly and lipid binding.

One of the most common types of ZnF, also referred to as ‘classical’ ZnF, is the Cys2His2 type. It recognizes a specific nucleotide triplet inside the DNA major groove. In most cases, a single ZnF domain is not enough to achieve high‐affinity binding to the specific DNA target sequence. However this is improved when two or more ZnFs are joined together in tandem repeats, like a string. Given their small size and their ability to target unique genomic sites, ZnFs were one of the first tools developed for genome modification offering a great potential for gene therapy opportunities. 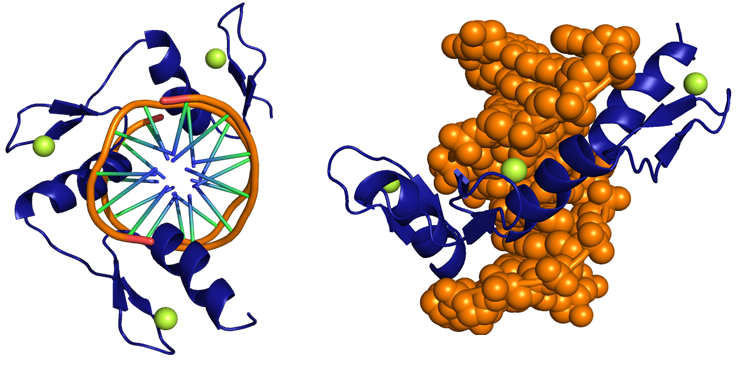 Three zinc-fingers bound to DNA in its major groove. The DNA is shown from above as cartoons (left) and from the side as spheres (right). PDB id 1ZAA

Sometimes, mutations in the genetic code result in faulty genes leading to debilitating or life-threatening genetic disorders. To fix these faulty genes, that make defective proteins, genome editing techniques offer great promise to provide a ‘functional cure’. Through gene editing techniques specific pieces of DNA can either be deleted, modified, or replaced, in order to encode specific information.

In one example, fusing a ZnF to a transcription factor domain, has been shown to block transcription of an oncogene in a mouse cancer cell line. This method of altering gene transcription led to the generation of ‘smart’ zinc‐finger DNA‐binding domains that highlighted their potential as tools for target validation, in addition to, clinical therapeutics.

Over the past 5 years, targeted genetic engineering using Zinc-finger nuclease (ZFN) technology has changed dramatically. In ZFN, an artificial zinc-finger endonuclease cuts the desired piece of DNA to introduce site specific DNA breaks. This allows the body's natural repair system to efficiently modify the targeted site. The type of DNA repair can lead to either gene correction or gene disruption.

ZFN-mediated gene disruption is proving beneficial to cure HIV. In order to make HIV patients resistant to virus infection, ZFN disrupts the gene for chemokine receptor type 5. The first HIV patient to receive this treatment, also known as the “Berlin patient,'' is still free of HIV, eleven years later, suggesting he has been cured of the disease.

Pre‐clinical trials with ZFN mediated gene editing, to target defective genes for replacement with the correct copy, have shown promising results for genetic disorders such as X‐linked severe combined immune deficiency (SCID), sickle‐cell anemia (SCA), haemophilia, and Gaucher's disease. If successful, this would provide a permanent cure for patients with these disorders.

So far, these exciting studies have opened doors to new possibilities, but many questions remain unanswered. Only time will tell whether this technology becomes more robust to replace current trusted methods.

The artwork, entitled ‘A grip on the heart’ was created by Shuhan (Catherine) Wang, a 16 year old student from Stephen Perse Foundation in Cambridge, who was inspired by DNA and its interaction with this small yet mighty little finger of zinc-finger proteins. She draws her inspiration from this interaction, and relates it to one's emotions, where she believes the heart plays an important role in self-belief.