Breast cancer and BRCA1: an intertwining story of DNA and protein

For some, the term BRCA1 was first heard when actress Angelina Jolie’s opinion piece was published in the New York Times in 2013. In the opinion piece, Angelina Jolie announced she had made the decision to have a double mastectomy based on her family history of aggressive breast and ovarian cancers and genetic screening results revealing a BRCA1 mutation. Although mutations in the BRCA1 gene are relatively rare, the news story of Angelina Jolie’s decision was an impactful and inspirational example of genetic testing being used to inform and empower against disease. Hereditary breast cancer, such as that caused by mutations in BRCA1, only composes 5-10 % of all cases of breast cancer. However, hereditary forms of breast cancer are associated with more aggressive disease and the occurrence of breast cancer in younger women.

The BRCA1 story intertwines DNA and proteins as reflected by this month’s artwork. The role of the protein encoded by the BRCA1 gene can be envisioned as the protein acting like a doctor in a battlefield hospital organizing a medical crew to mend a wounded section of DNA. This image is helpful because it is not BRCA1 on its own that repairs the DNA, but the repair work involves multiple protein ‘team-mates’, or protein partners.

The mutations found in the BRCA1 gene of Angelina Jolie and others, cause their bodies to produce non-functional or less functional ‘battlefield doctor’ proteins. This impedes processes that the body uses to mend the wear-and-tear damage that occurs to DNA.

The DNA damage mended by BRCA1 is damage that accumulates over time. The amount of DNA damage is impacted by exposure to various factors, such as UV and certain chemicals, including some that are naturally produced by normal processes in our bodies. Abnormal cell growth, such as tumours, are linked to damage occurring in our cells at the DNA level, hence our bodies have multiple mechanisms to repair DNA damage.

The race to discover the gene causing hereditary breast cancer

BRCA1 is a very familiar term to researchers studying breast and ovarian cancer. The race to discover a hereditary cause for breast cancer had occurred in the early 1990s -- years before Angelina Jolie’s announcement. The first gene discovered with mutations that could be associated with hereditary breast cancer was called BRCA1 and a subsequent gene was discovered and called BRCA2. These names correspond to BReast CAncer, early onset, gene 1 and gene 2. This is perhaps somewhat confusing, because the proteins that are encoded by BRCA1 and BRCA2, when fully functional, act in a manner that protects against various cancers, including breast, ovarian and prostate cancer.

UniProt provides a centralized portal of information about both these proteins:

We will focus here on BRCA1, because BRCA2 at the protein level is different from BRCA1. However, both BRCA1 and BRCA2 are involved in the DNA repair process that uses the undamaged sister chromatid to carry out high-fidelity repair of DNA double-strand breaks. This DNA repair process is referred to as homologous recombination.

The discovery of the BRCA1 gene was followed by the discovery of a new protein domain. The domain was named BRCT because it was first identified in the C-terminal region of BRCA1 (BRCT = BRCA1 carboxyl terminus). In the human BRCA1 protein, there are two BRCT domains adjacent to each other and these are shown in this month’s artwork.

BRCT domains that were first identified in the BRCA1 protein. In human BRCA1 there are two adjacent BRCT domains (PDB ID: 1JNX). Many structures of the BRCT domains from BRCA1 have been determined and these can be found on the PDBe-KB BRCA1 protein page.

EMBL-EBI provides a centralized portal on the BRCT domain:

The BRCT domain that was first discovered in BRCA1, subsequently has been found in many other proteins, such as those involved in single-strand DNA repair (PDB ID: 1CDZ). BRCT domains can interact with short protein sections, or peptides, with a preference for those that have been phosphorylated. Phosphorylation is a chemical signal utilized in many cellular processes, including the DNA repair processes.

A small part of a bigger picture

The two BRCT domains are actually only a small portion of the whole BRCA1 protein. The 1st and 2nd BRCT domains correspond to amino acids numbered regions in human BRCA1 of 1642-1733 and 1756-1855. These two domains correspond to approximately 10 % of the whole BRCA1 protein (based on either protein weight or amino acid sequence).

The human BRCA1 protein can be visualized as a protein with regions that act like a ribbon or string that link together several regions that are more complex. The two BRCT domains are examples of regions of greater complexity found in BRCA1. In the PDB, we have information on regions of complexity at both ends of the BRCA1 protein. This includes the two BRCT domains that are found in the C-terminal region of BRCA1 and a ring finger domain that is found in the N-terminal region of BRCA1. 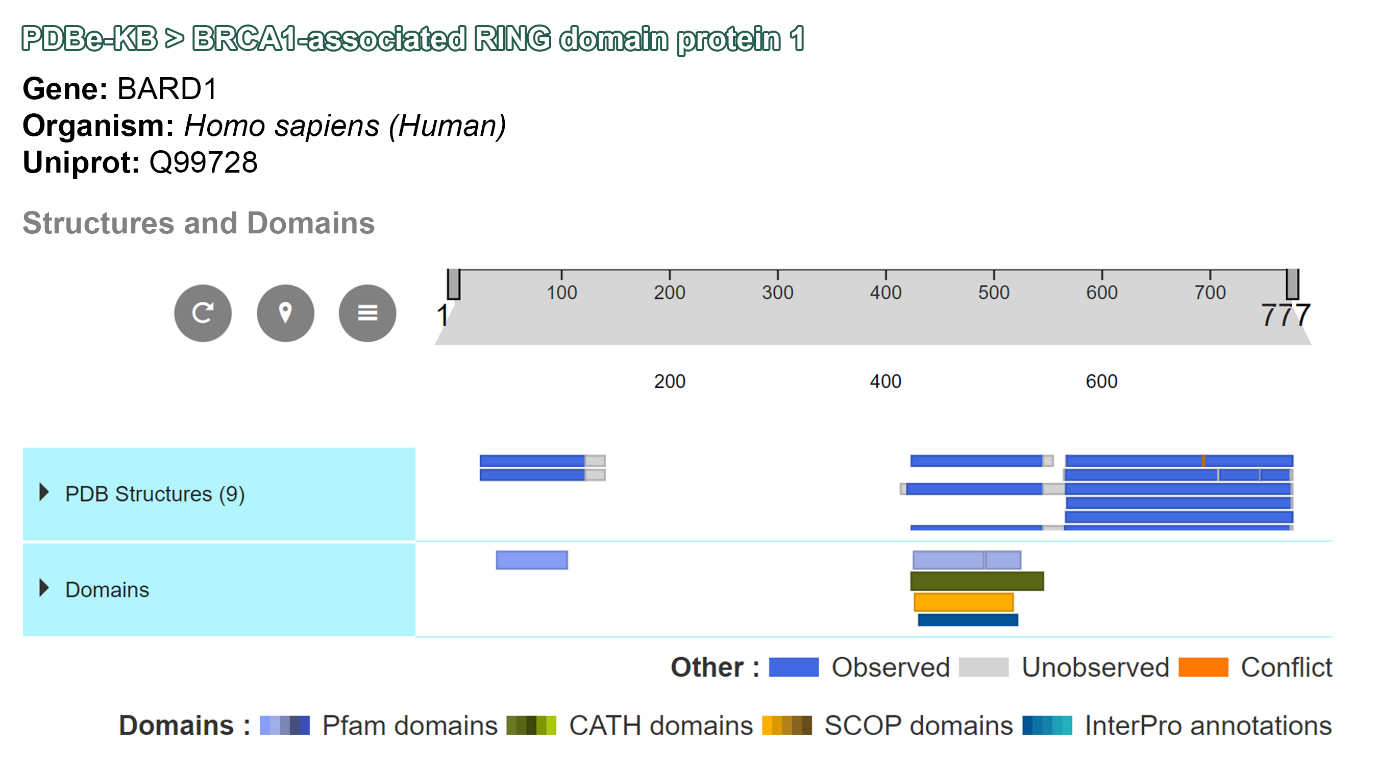 The first structure of the N-terminal domain in BRCA1 (PDB ID: 1JM7) was determined by NMR. The structure shows this domain forms a protein complex with the N-terminus of BARD1. BARD1 stands for BRCA1-Associated RING Domain Protein 1. BARD1, similar to BRCA1, is a protein with regions of high and low complexity thus can be visualized as a string with regions of more complexity.

The second structure of the N-terminal domain in BRCA1 was determined by cryo-electron microscopy. This latest structure expanded our understanding of BRCA1’s interactions with its protein partners. A 3.9 Angstrom map (EMDB ID: EMD-22581) was analysed and interpreted by scientists to generate a new structure (PDB ID: 7JZV). This structure shows the interaction between BRCA1:BARD1 in combination with another protein and how these three together form an interaction with histone units wrapped with DNA. This structure builds upon previous knowledge and utilizes the NMR structure (PDB ID: 1JM7) and other previously determined structures as building blocks that with further processing help determine the structure of the protein:DNA complex. 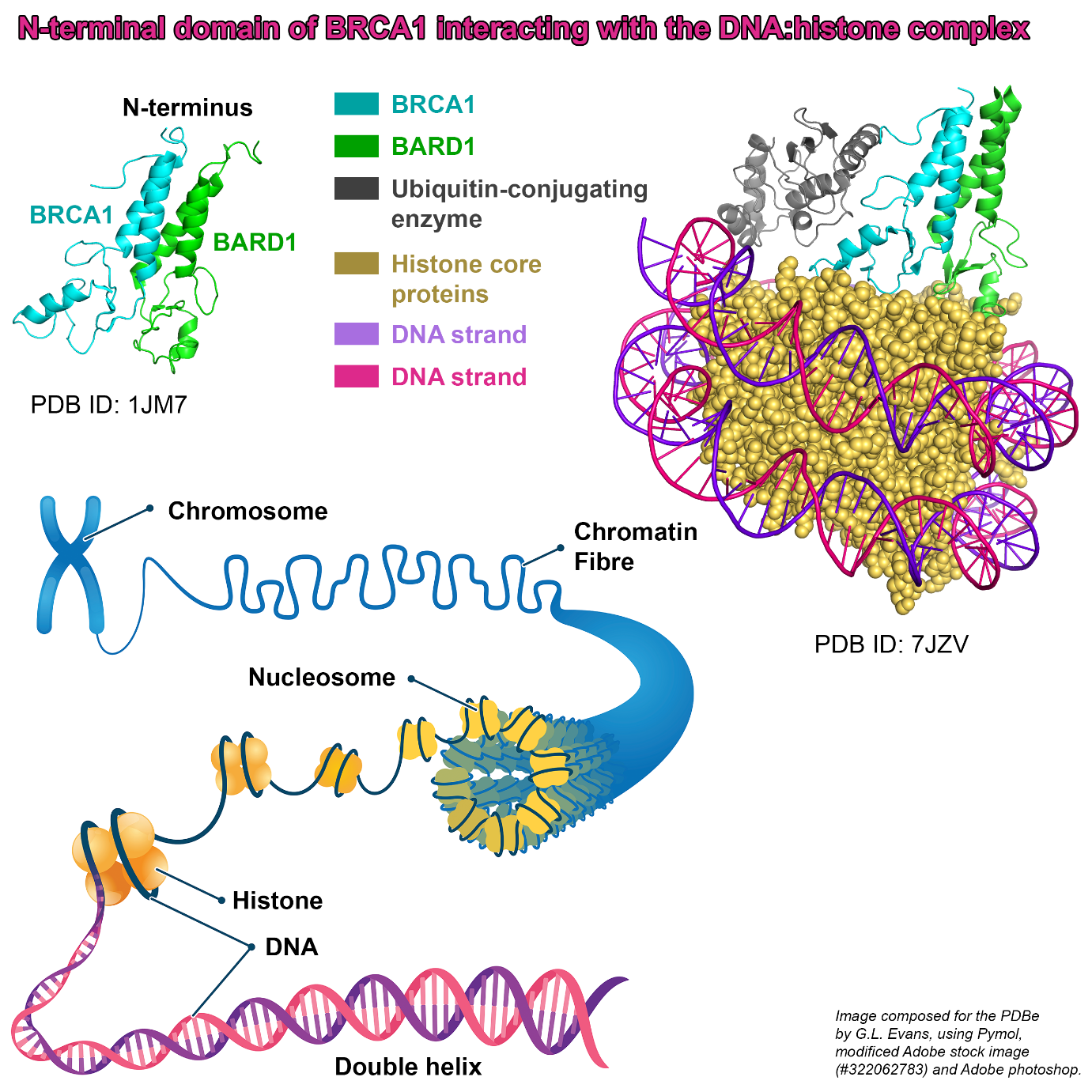 The BRCA1 ring finger domain interacts with the BARD1 ring finger domain (PDB ID: 1JM7). The BRCA1:BARD1 complex interacts with histone units wrapped with DNA, and an ubiquitin-conjugating enzyme (PDB ID: 7JZV). The cartoon schematic helps relate the experimentally determined structures to larger features found in our cells. The structures of the N-terminal domain in BRCA1 show one way this protein anchors itself to the chromatin fibre -- or more precisely, how one end of BRCA1 anchors itself to the DNA:histone complex. An interactive 3D view of the protein:DNA complex structure can be accessed here or by the ‘3D Visualisation’ link on PDBe entry page of 7JZV.

One of the challenges for genetic screening is that some mutations in BRCA1 do nothing, while others greatly increase an individual’s chance of developing breast cancer. At the protein level, we are increasing our knowledge of the multiple interactions that occur between BRCA1 and other proteins. It is challenging, but insight is growing.

The protein structure represented in the artwork contains a mutation (PDB ID: 3K16) that is observed to change the BRCA1 protein in a very subtle way by rearranging a hydrogen bond network adjacent to the peptide recognition grove of BRCT. 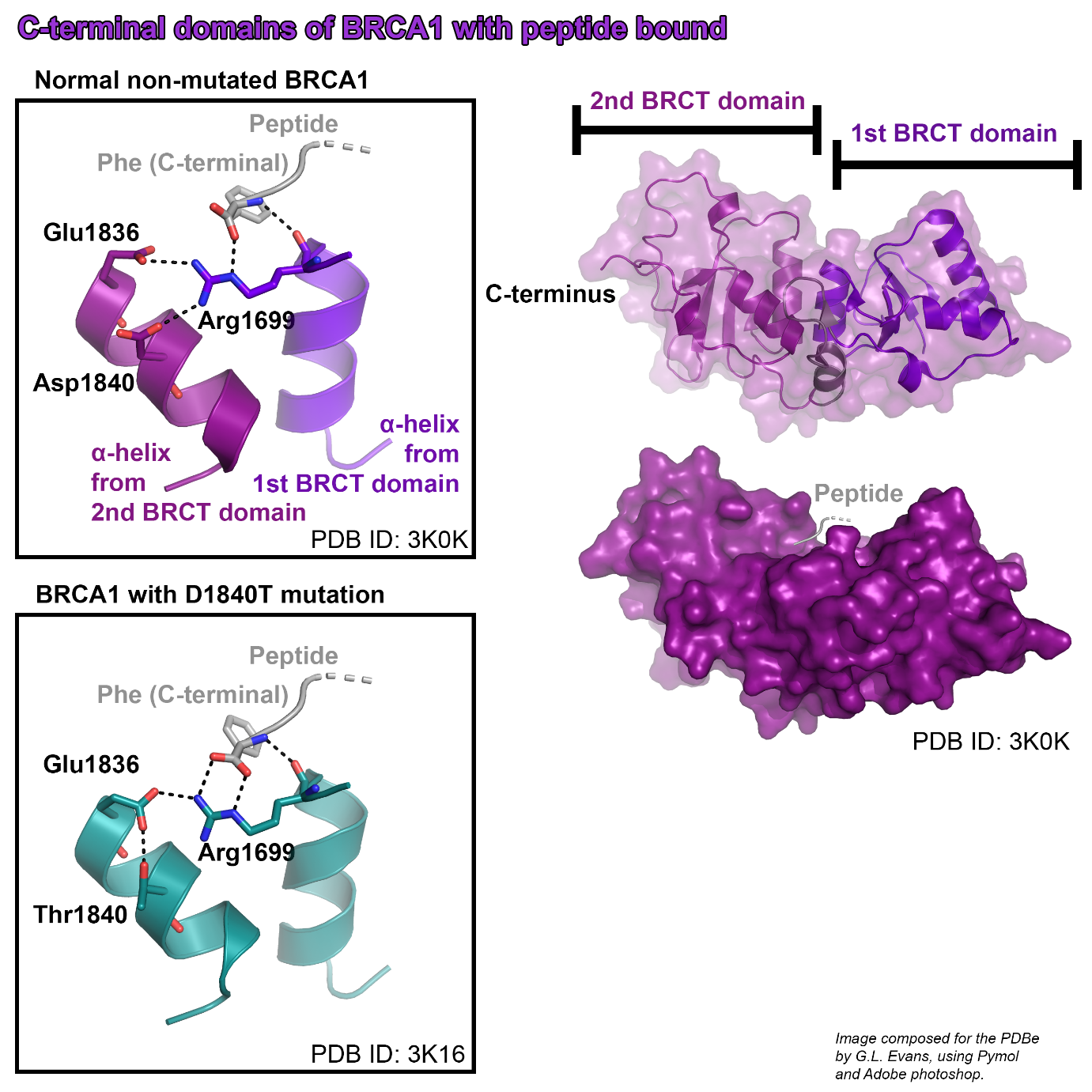 In BRCA1 is a groove that binds a short section of protein, or peptide. This groove is found between the two BRCT domains (PDB ID: 3K0K).This binding groove has complementarity that enables a peptide with a specific amino acid sequence (and phosphorylation site) to be recognized and bound by BRCA1. Here we show a phenylalanine from the peptide being recognized and bound by amino acids in BRCA1. These recognition interactions are subtly changed in BRCA1 that contain a D1840T mutation (PDB ID: 3K16).

Efforts are ongoing to grow our insight into BRCA1 in various ways. Among these is the creation of a central repository to collect information from patients around the globe in order to generate an open source database of information for developing future genetic screens. The latest laboratory techniques are being applied to: (a) better define the genes other than BRCA1 and BRAC2 that may be associated with hereditary breast cancer, as well as (b) generate mutations across the BRCA1 gene in a lab setting to see which cause the protein to be non-functional or have reduced function thus are likely to cause disease and which mutations leave BRCA1 fully functional and thus should not cause disease.

Complementary to these efforts that look at BRCA1 at the gene / DNA level, structural biologists and protein scientists continue to expand our understanding at the protein level about BRCA – a protein that plays such a pivotal role in repairing breakages in our DNA that because of this role it can protect us from cancer.

More information about the efforts looking at BRCA1 at the gene / DNA level are listed here:

(1) Database collecting the variants/mutations in BRCA1 and BRCA2 found in breast cancer patients around the world as an open-source resource - a project from Global Alliance for Genomics and Health (GA4GH). https://brcaexchange.org/

(2) Genotyping tumours to get broader insight into BRAC1 and BRAC2 + 105 other potential biomarkers – work by the Breast Cancer Association Consortium (BCAC). http://www.b-cast.eu/b-cast-gene-panel/

(3) Database with broad coverage of the impact of variants/mutations across the length of BRCA1 gene using CRISPR/Cas9-based technology. https://sge.gs.washington.edu/BRCA1/

Tengyu Zhao, a 14-year-old student from Perse School, Cambridge, UK, created this artwork. She is fine art student who also has a keen interest in biology and aspires to become a marine biologist. This dry-point etch print was inspired by the crystal structure of tumor suppressor gene BRCA1. Using DNA as the central piece, she attempts to portray the connections of nucleotide bases of DNA.

Two BRCT domain structures from the C-terminal region of BRCA1

(a) Crystal structure of the BRCT repeat region from the breast cancer associated protein, BRCA1

Structures from the N-terminal region of BRCA1

One BRCT domain structure from the C-terminal region of XRCC1

1. On the structures discussed in this article

Crystal structure of the BRCT repeat region from the breast cancer-associated protein BRCA1.

Comparison of the structures and peptide binding specificities of the BRCT domains of MDC1 and BRCA1.

BRCA1/BARD1 site-specific ubiquitylation of nucleosomal H2A is directed by BARD1.

2. Interesting article on the impact of Angelina Jolie’s story on public health

The Angelina Jolie effect: how high celebrity profile can have a major impact on provision of cancer related services

3. The discovery and perspectives on the BRCA1 gene (focused on the contribution/perspective from Dr Mary-Claire King)

“The Race” to Clone BRCA1 by Dr Mary-Claire King