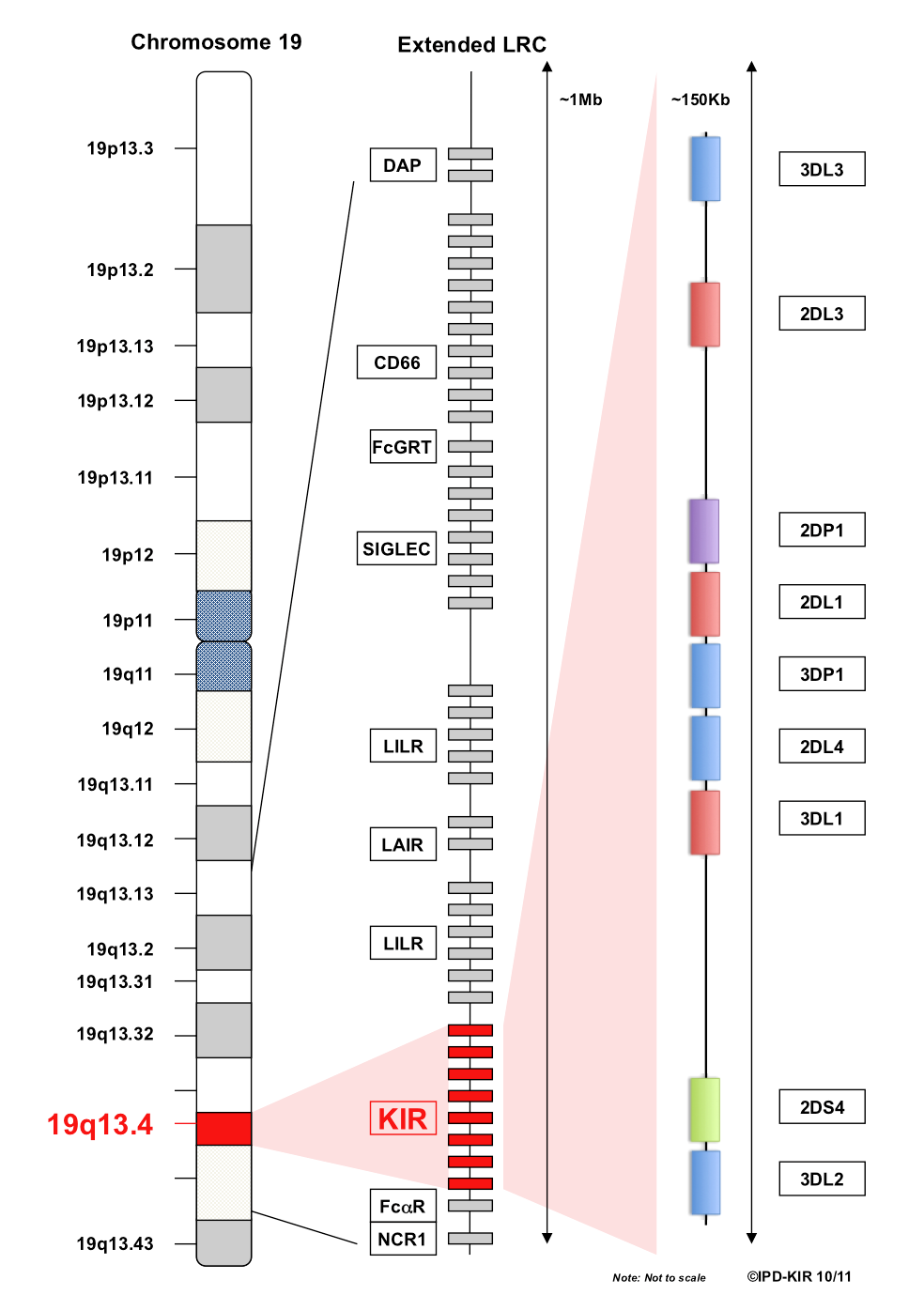 Type I KIR2D genes, which include the pseudogene KIR2DP1 as well as KIR2DL1-3 and KIR2DS1-5 genes, possess eight exons as well as a pseudoexon 3 sequence (8, 9, 10). This pseudoexon is inactivated in Type I KIR2D. In some cases this is due to a nucleotide substitution located on the intron 2-exon 3 splice-site where its nucleotide sequence exhibits a high-degree of identity to KIR3D exon 3 sequences and possesses a characteristic three base pair deletion. In other cases a premature stop codon initiates differential splicing of exon 3 (11). Within the Type I KIR2D group of genes, KIR2DL1 and KIR2DL2 share a common deletion in exon 7 distinguishing them from all other KIR in this exon, which results in a shorter exon 7 sequence. Similarly, within Type I KIR2D, KIR2DL1-3 differ from KIR2DS1-5 only in the length of their cytoplasmic tail encoding region in exon 9. The KIR2DP1 pseudogene structure differs from that of KIR2DL1-3 in that the former has a shorter exon 4 sequence, due to a single base pair deletion (12). 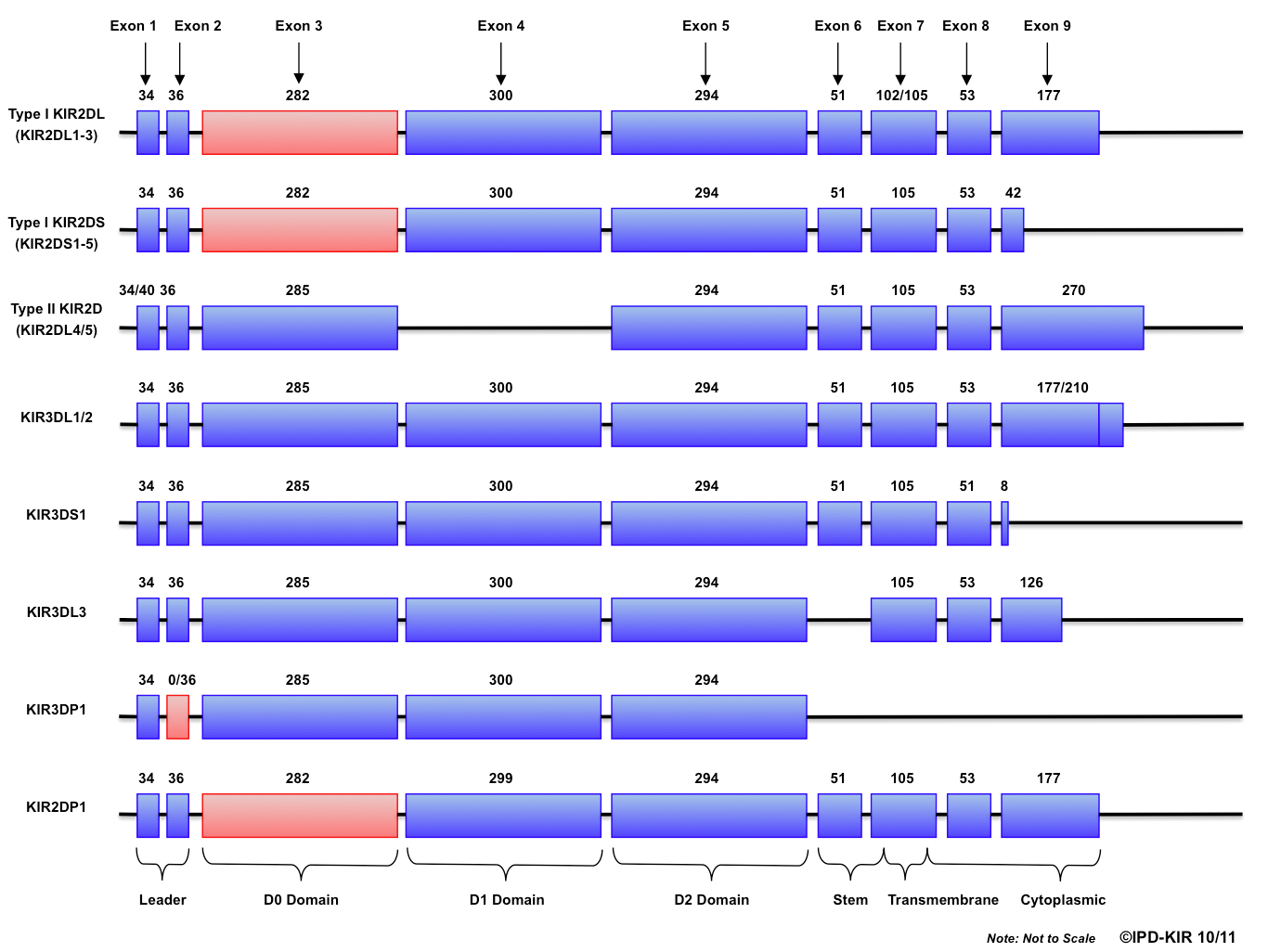 Figure 2: KIR gene organisation. KIR genes sharing similar structural organisation have been grouped accordingly, while KIR genes with structural peculiarities are shown on their own. The coding regions of the exons are represented as blue boxes, their size in base pairs is shown in digits above them. The pseudoexon 3 and the deleted KIR3DP1 exon 2 is shown in red. The brackets at the bottom of the diagram illustrate the way in which the exons code for each protein domain and region.

KIR3D genes possess nine exons and include the structurally related KIR3DL1, KIR3DS1, KIR3DL2 and KIR3DL3 genes. KIR3DL2 nucleotide sequences are the longest of all KIR genes and span 16,256 bp in full genomic sequences and 1,368 bp in cDNA. Within the KIR3D group, the four KIR genes differ in the length of the region encoding the cytoplasmic tail in exon 9 (8, 15, 16). The length of the cytoplasmic tail of KIR proteins can vary from 14 amino acid residues long (in some KIR3DS1 alleles) to 108 amino acid residues long (in KIR2DL4 proteins). Additionally, KIR3DS1 differs from KIR3DL1 or KIR3DL2 in that the former has a shorter exon 8 sequence. KIR3DL3 differs from other KIR sequences in that it completely lacks exon 6. The most extreme KIR gene structure difference observed was that of KIR3DP1 (17). This gene fragment completely lacks exons 6 through 9, and occasionally also exon 2. The remaining portions of the gene which are present (exon 1, 3, 4 and 5) share a high level of sequence identity to other KIR3D sequences, in particular to KIR3DL3 sequences.

KIR genes are organised into two broad haplotypes termed A and B, which have been shown to exhibit extensive variation in the number and type of KIR genes present. Each A or B KIR haplotype consists of four framework genes which, with very few exceptions, are present in every individual. The KIR gene cluster is flanked by KIR3DL3 at the centromeric end, KIR3DL2 at the telomeric end and KIR3DP1 and KIR2DL4 in the middle (3, 7, 18). These four framework genes limit two regions of variable KIR gene content where the remaining KIR genes are located. All KIR genes are arranged in a head to tail fashion approximately 2.4 Kb apart from each other (5). Many KIR haplotypes have been defined by family segregation studies (19, 20, 21).

Based on their gene content, KIR genotypes can be divided into two broad haplotypes termed A and B. These haplotype groups were originally distinguished using restriction fragment length polymorphism (RFLP), with the presence of a ~24 Kb HindIII fragment indicating a group B haplotype (7, 22). However, these haplotype groups are currently distinguished by the number and combination of KIR genes present. According to this new KIR haplotype group definition, group A haplotypes are generally non-variable in its gene organisation with all four framework genes present plus KIR2DL1, KIR2DL3, KIR3DL1, KIR2DS4 and KIR2DP1. Group B haplotypes show a lot more variation in the number and combination of KIR genes present and are characterized by the presence of one or more of KIR2DL2, KIR2DL5A/B, KIR2DS1, KIR2DS2, KIR2DS3, KIR2DS5 and KIR3DS1 genes (23, 24). Group B haplotypes possess a greater variability in the number of genes present. They possess from one to five activating KIR (i.e. KIR2DS1, KIR2DS2, KIR2DS3, KIR2DS5 and KIR3DS1) and can incorporate inhibitory KIR genes which are known to be absent in group A haplotypes (i.e. KIR2DL2 and KIR2DL5) (21). KIR genotyping techniques used in family segregation analysis have defined over 40 distinct group B haplotypes (19, 21, 25, 26). For a diagramatic representation of sequenced KIR haplotypes, please see the Sequenced Haplotypes page.

The expression of some KIR genes and alleles is affected by intrinsic genetic defects which lead to their non-transcription, this is the case of the KIR pseudogenes KIR2DP1 and KIR3DP1 and of some KIR2DL5 alleles (12). Furthermore, some structurally intact KIR genes are transcribed but only expressed at low levels on the surface of NK cells for reasons which remain unknown, as happens for KIR3DL3 (28). In addition to this, recent discoveries have shown that amino acid polymorphisms of particular KIR proteins lead to either their cytoplasmic retention or to the formation of soluble variants (as has been shown for the KIR3DL1*004 and KIR2DS4*003 proteins, respectively). KIR3DL1*004 is not expressed in the surface of NK cells due to the presence of an amino acid substitution which disrupts the proper folding of the D0 domain (29). However, KIR2DS4*003 proteins are transcribed but not expressed on the cell surface due to the disruption of their protein sequence (due to a 22 bp deletion in exon 5) after the D2 domain (30, 31). The absence of a transmembrane and cytoplasmic domain together with the high frequency of this allele in human populations has suggested the possibility that this deviant KIR protein might be secreted by NK cells (31, 32). 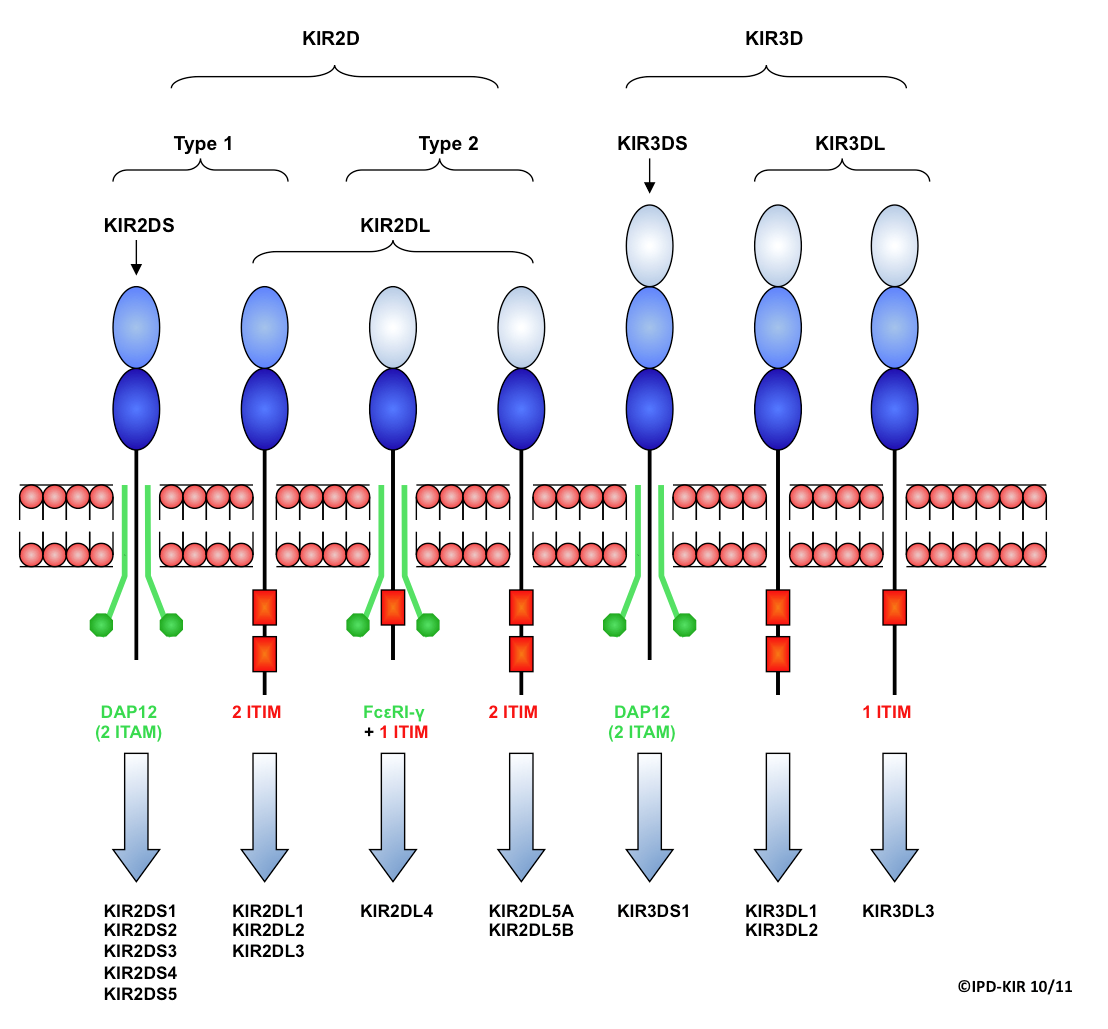 Figure 3: KIR protein structures. The structural characteristics of two and three Ig-like domain KIR proteins are shown. The association of activating KIR to adaptor molecules is shown in green, whereas the ITIM of inhibitory KIR are shown as red boxes.

KIR proteins possess characteristic Ig-like domains on their extracellular regions, which in some KIR proteins are involved in HLA class I ligand binding. They also possess transmembrane and cytoplasmic regions which are functionally relevant as they define the type of signal which is transduced to the NK cell. KIR proteins can have two or three Ig-like domains (hence KIR2D or KIR3D) as well as short or long cytoplasmic tails (represented as KIR2DS or KIR2DL). Two domain KIR proteins are subdivided into two groups depending on the origin of the membrane distal Ig-like domains present. Type I KIR2D proteins (KIR2DL1, KIR2DL2, KIR2DL3, KIR2DS1, KIR2DS2, KIR2DS3, KIR2DS4 and KIR2DS5) possess a membrane-distal Ig-like domain similar in origin to the KIR3D D1 Ig-like domain but lack a D0 domain. This D1 Ig-like domain is encoded mainly by the fourth exon of the corresponding KIR genes. The Type II KIR2D proteins, KIR2DL4 and KIR2DL5, possess a membrane-distal Ig-like domain of similar sequence to the D0 domain present in KIR3D proteins, however, Type II KIR2D lack a D1 domain. Long cytoplasmic tails usually contain two Immune Tyrosine-based Inhibitory Motifs (ITIM) which transduce inhibitory signals to the NK cell. Short cytoplasmic tails possess a positively charged amino acid residue in their transmembrane region which allows them to associate with a DAP12 signalling molecule capable of generating an activation signal (7).

Exceptions to this is KIR2DL4, which contains only one N-terminus ITIM. In addition, KIR2DL4 also possesses a charged residue (arginine) in its transmembrane domain, a feature which allows this receptor to elicit both inhibitory and activating signals (32). KIR control the response of human NK cells by delivering inhibitory or activating signals upon recognition of MHC class I ligands on the surface of potential target cells (10). 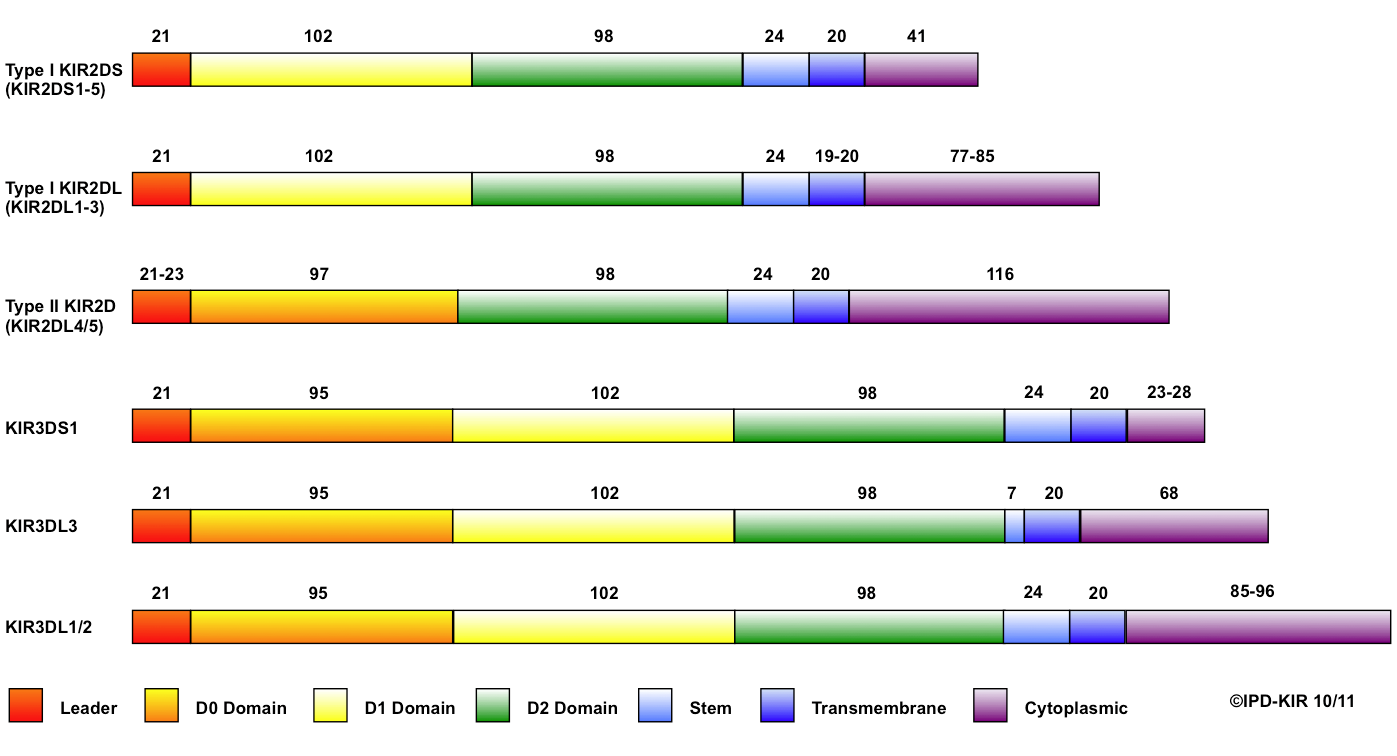 Figure 4: >Approximate KIR protein domain and region lengths. The main structural characteristics of KIR proteins are shown where the domains and regions are represented as boxes of different colours according to the key at the bottom of the figure. The length of each domain or region is shown in digits above their corresponding box.

KIR proteins vary in length from 306 to 456 amino acid residues. Although the differences in protein length are mostly the consequence of the number of Ig-like domains present, cytoplasmic region length diversity is also an influencing factor. The leader peptide of most KIR proteins is 21 amino acid residues long. However, the presence of a different initiation codon generates a correspondingly longer leader peptide in KIR2DL4 proteins (13).

All references are linked to the PubMed abstract where possible.

Please see our licence for our terms of use.