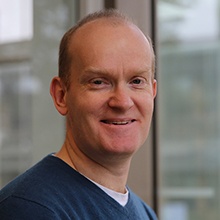 Dr Steven Newhouse is Head of the Technical Services cluster that brings together 6 teams supporting EMBL-EBI's IT activities. These teams include the Systems Infrastructure, Systems Applications, Web Production, Web Development, Software Development & Operations, and he leads the Technology and Science Integration team. The Technology and Science Integration team works to bring technology (both new innovations and established services) from Europe and around the world to further develop and support the Science taking place at EMBL-EBI.

Previously, he was a Program Manager in the High Performance Computing group in the Windows Server division at Microsoft, USA. At Microsoft he managed access to the Windows Computer Cluster Server product from non-Windows environments; primarily through the Open Grid Forum's (OGF) High Performance Computing Basic Profile (HPCBP) specification. Between 2008 and 2012 he was a member and then chair of the OGF Board of Directors.

Before starting at Microsoft in 2007, he was Director of the Open Middleware Infrastructure Institute UK (OMII-UK), and on the management or supervisory boards of several major centres and projects within the UK e-Science programme. Previously, he was the Sun Lecturer in e-Science in the Department of Computing at Imperial College London and Technical Director of the London e-Science Centre (LeSC), also based at Imperial, where he did his early research into the modelling of underwater acoustics using high performance computing resources.

The continued growth of the stored data and diverse analysis taking place at EMBL-EBI provides an ongoing need to assess and deploy where appropriate new technology and services that support the science taking place at EMBL-EBI and in the wider community. The Technology and Science Integration group will build strong collaborations with technology innovators and service providers in Europe and around the world to help shape and adopt new technologies within EMBL-EBI.