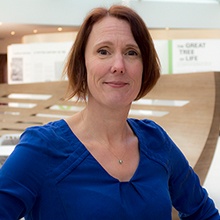 Prior to joining EMBL-EBI in 2000, Helen was a post-doctoral researcher at the University of Leicester, where she worked on the genetic basis of the genetic disease Primary Pulmonary Hypertension, Hyphophatasia and synteny at human chromosomes 7 and 12. Her PhD thesis examined the temperature compensation of circadian rhythms in Drosophila with Professor Bambos Kyriacou. If she ever goes back to the lab it will be to work on an organism where forward and reverse genetics are tractable.

The Samples, Phenotypes and Ontologies team, led by Helen Parkinson, is organised into three themes: High throughput mammalian phenotyping, Semantics as a Service and two human genetics resources, the GWAS Catalog and the PGS Catalog (in Collaboration with Cambridge colleagues Mike Inouye and Sam Lambert). The team is part of the Molecular Archives Cluster and works closely with cluster colleagues on the Human Cell Atlas, CINECA, Covid19 Portal.

Henriette Harmse leads the teams semantic data integration team delivering ontologies and tools such as OLS as well as the development components of the GWAS Catalog. The team's semantic interoperability tools are used by EBI Data Archives and Knowledge Bases, including the GWAS Catalog, OpenTargets, pharma and agrifood companies and are ELIXIR Recommended Interoperability Resources.

Led by Project Leads Laura Harris, Jackie MacArthur and Yomi Mosaku the team delivers the infrastructure and content for the GWAS Catalog, an NHGRI funded resource, summarising data from Genome Wide Association Studies in the form of curated SNP-Trait associations and supporting summary statistics. The GWAS Catalog Team collaborates with OpenTargets to deliver genetic data in support of target prioritisation and provides GWAS data to the European Covid19 portal.

Members of the team work on ~15 projects with external collaborators where we are funded by the Chan-Zuckerberg Institute (CZI), the European Commission, the BBSRC, the Wellcome Trust, the National Institutes of Health and OpenTargets. These range from data analysis and generation projects such as IMPC and projects which are mainly infrastructural such as CORBEL, EOSCLife and EJP CoFund and EXCELERATE. We work closely with ELIXIR as members of the ELIXIR Interoperability Platform and developers of ELIXIR deposition databases.

In collaboration with partners in the KOMP2 project and the International Mouse Phenotyping Consortium, the team manages, analyses, and distributes complex phenotypic data from 20,000 knockout mouse lines and, promotes mouse data integration internationally via the IMPC. The team also develops open-source software tools for managing data, developing and integrating ontologies and data, and works with semantic web technologies.

We collaborate closely with Melissa Haendel and Chris Mungall of Monarch, an integration project for genotype/phenotype data, by supplying human and mouse phenotypic data and using their tools in delivery of the IMPC portal. We consume the Uberon Ontology - a critical integrative resource for vertebrate anatomy used across EBI's sample representation and the MONDO Disease Ontology.