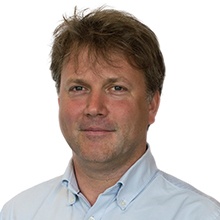 Ewan Birney is Deputy Director General of EMBL. He is also Director of EMBL-EBI with Dr Rolf Apweiler, and runs a small research group.

Ewan completed his PhD at the Wellcome Sanger Institute with Richard Durbin. In 2000, he became Head of Nucleotide data at EMBL-EBI and in 2012 he took on the role of Associate Director at the institute. He became Director of EMBL-EBI in 2015. In 2020, Ewan became the Deputy Director General of EMBL. In this role, he assists the EMBL Director General in relation to engagement with EMBL Member States and external representation.

Ewan led the analysis of the Human Genome gene set, mouse and chicken genomes and the ENCODE project, focusing on non-coding elements of the human genome. Ewan’s main areas of research include functional genomics, DNA algorithms, statistical methods to analyse genomic information (in particular information associated with individual differences in humans and Medaka fish) and use of images for chromatin structure.

Ewan is a non-executive Director of Genomics England, and a consultant and advisor to a number of companies, including Oxford Nanopore Technologies, Dovetail Genomics and GSK. Ewan was elected an EMBO member in 2012, a Fellow of the Royal Society in 2014 and a Fellow of the Academy of Medical Sciences in 2015. In 2019, Ewan became a Board Member of the Biotechnology and Biological Sciences Research Council (BBSRC).

He has received a number of awards including the 2003 Francis Crick Award from the Royal Society, the 2005 Overton Prize from the International Society for Computational Biology and the 2005 Benjamin Franklin Award for contributions in Open Source Bioinformatics.

Find out about research activity in the Birney research group